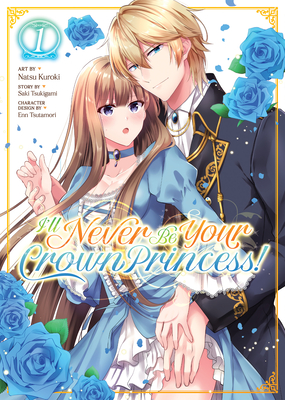 
Email or call for price
In this sexy isekai romcom manga, a noblewoman loses her virginity to a mystery man to avoid marrying a prince--but he turns out to be the prince himself!

Liddy, who was Japanese in her previous life, is now the daughter of a duke and engaged to marry the gorgeous Crown Prince Friedrich. Sounds like a dream come true—except this is a world that practices polygamy, and Liddy refuses to marry a man with multiple wives. To sabotage the engagement, she loses her virginity to a stranger, but that plan is thwarted by a surprising revelation. What will happen to Liddy next in this hot fantasy romance?
Saki Tsukigami is an author in Japan best known for sexy josei tales, including the light novel series I'll Never Be Your Crown Princess!

Natsu Kuroki is a manga artist in Japan best known for sexy josei manga, including the manga version of I'll Never Be Your Crown Princess!

Enn Tsutamori is a prolific artist in Japan best known for the illustrations in the light novel series I'll Never Be Your Crown Princess!