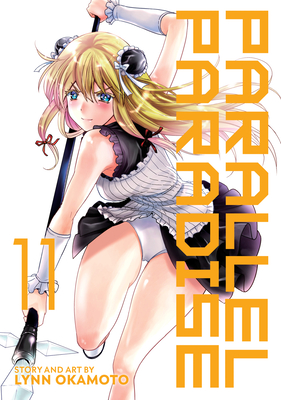 This is book number 11 in the Parallel Paradise series.

A DUEL TO THE DEATH!

After protecting Meese town from the witch Galia, Yota and his cohorts head to Sandrio to awaken Yota’s childhood friend. The bizarre and cruel creatures they encounter in the forest are bad enough, but an even worse surprise awaits them at the desert town. A mysterious army surrounds the city led by a beautiful and ruthless female knight who swears to destroy the only male in the world, along with any woman who supports him!
Lynn Okamoto is a veteran Japanese manga creator, best known for the manga and anime series Brynhildr in the Darkness and Elfen Lied, as well as the ongoing manga series Parallel Paradise.