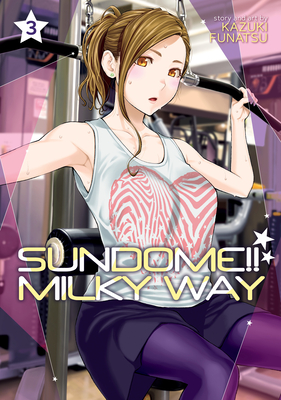 This is book number 3 in the Sundome!! Milky Way series.

NUT UP OR SHUT UP

Yoshitake, the world’s horniest man, has ditched Lune—the universe’s sexiest alien who came to Earth for his sperm—to date his innocent co-worker Yuizono Haruka. Another co-worker, Mika, hot (and hotheaded) with sexual secrets of her own, finds herself trapped in a gym locker with Yoshitake where it’s getting more cramped by the moment. But if he ever ejaculates into an Earth woman, Lune’s entire species is doomed to extinction! It’s a hard time to be hard up!
Kazuki Funatsu is a popular and incredibly prolific Japanese manga creator, best known for Yokai Girls, Addicted to Curry, and Sundome!! Milky Way.