An Incredible Boy and a Remarkable Man (Paperback) 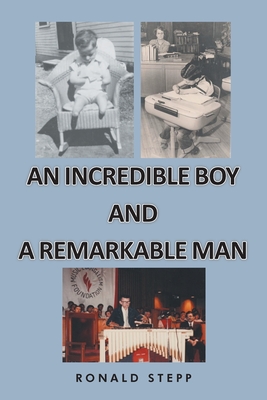 In An Incredible Boy and a Remarkable Man, author Ronald Stepp tells for the first time the life story of his older brother, Shelby Ray Stepp. It begins with Shelby's tragic physical condition at birth-he had no mouth, he had no hands, he had no feet, and his eyes were crossed.

The reader will follow the immediate reaction of the doctor who delivered the baby and of his parents, especially his mother, and their responses after a time of consultation and deliberation. Then, the reader will follow along chronologically with the miraculous events that took place that negated euthanasia, provided a pseudo-mouth for feeding but discovered a one-inch tongue, which precluded speech and impaired eating, equipped a Godly mother to give continuous attentive care, and the help of an extended family (as effective as a platoon of US Special Forces).

The reader of An Incredible Boy and a Remarkable Man will learn how God used a mother's love and care to raise a child who at birth was more crippled than any newborn on record who lived to adulthood. Also, the reader will become excited about what the "little boy that could" would achieve in the world of public school and the music world with the awesome teaching of a Christian special education teacher.

As an adult, Shelby's speech impairment became his biggest handicap. It prevented him from getting good-paying employment. But the reader will learn how a negative situation became a significant part of his inspirational life.

Just as all of those of all ages who knew Shelby were inspired by his life, the reader who reads An Incredible Boy and a Remarkable Man from cover to cover will surely be inspired by how Shelby overcame obstacles in life from his early childhood to late adulthood with the grace of God.