As Deep as It Gets: Movies and Metaphysics (Paperback) 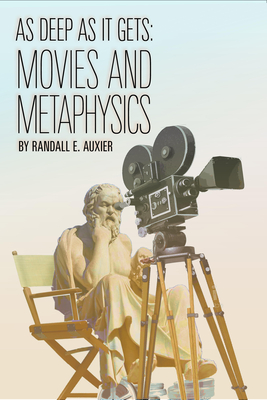 As Deep as It Gets: Movies and Metaphysics (Paperback)

As Deep as It Gets: Movies and Metaphysics is a witty and light-hearted introduction to philosophy through a deep study of some well-known movies and TV shows: Pulp Fiction, South Park, The Princess Bride, The Wizard of Oz, Super 8, The Twilight Zone, House of Cards, Inception, Monty Python's Life of Brian, His Dark Materials, Sergio Leone's westerns, and Alfred Hitchcock's Lifeboat.

All the major branches of philosophy are covered, including aesthetics, political philosophy, metaphysics, and the theory of knowledge. The author's approach is "Continental," with some American idealism and process philosophy in support. The emphasis is on the primacy of time as a key to interpreting human experience. In that regard, existentialism, phenomenology, and process philosophy are better guides to thinking about time than the more popular approaches that depend on language analysis.

Professor Randall E. Auxier says: "Philosophizing involves telling stories about life that are art, and making up stories that aren't life but provide a contrast to it. I want readers to add to what I see, and to take up interpretations contrary to mine. A healthy discussion is good for everybody."

Randall E. Auxier is a professor of philosophy and communication studies at Southern Illinois University Carbondale. He is a musician, an environmental activist, a union advocate, and a 2018 candidate for the United States House of Representatives in the 12th Congressional District of Illinois. He is a co-founder and co-director of the American Institute for Philosophical and Cultural Thought.