History of Spain: A Captivating Guide to Spanish History, Starting from Roman Hispania through the Visigoths, the Spanish Empire, the Bo (Paperback) 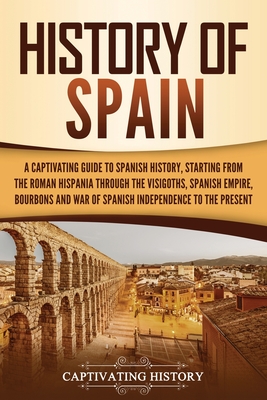 History of Spain: A Captivating Guide to Spanish History, Starting from Roman Hispania through the Visigoths, the Spanish Empire, the Bo (Paperback)

If you want to discover the captivating history of Spain, then keep reading...

Throughout the centuries, Spain has been subject to the lordship of other countries. It was occupied by the ancient Greeks and Romans, the Visigoths, the French, and the Muslims. It has been the playground of both the respectful and the ruthless. The Spanish coasts have been occupied by the trading empires of Carthage and Rome. All that time, Spain was told by others how to run their country, how to fight, whom to fight, and where to fight. They had one of the largest empires in the world-something history barely mentions-as they had acres of land in both North and South America, the Caribbean, Mesoamerica, and some islands in the Mediterranean. Evidence of Spanish architecture dots the world.

Yet Spain was also a battlefield for countries fighting for other causes. They were sucked into wars fought by the Carthaginians, Romans, Moors, Visigoths, British, French, Portuguese, Dutch, and Austrians, just to name a few. Some of the most famous men in history traversed Spanish soil, including Hannibal Barca, Julius Caesar, Augustus, Pompey, Hadrian, Vespasian, Trajan, Marcus Aurelius, and Napoleon. Four Roman emperors were born there, and Augustus Caesar spent his vacations there. Pablo Picasso was born in Spain, while El Greco moved there.

This book will examine the highs and lows of Spanish history and will hopefully pique your interest in learning more about it.

In History of Spain: A Captivating Guide to Spanish History, Starting from Roman Hispania through the Visigoths, the Spanish Empire, the Bourbons, and the War of Spanish Independence to the Present, you will discover topics such as

So if you want to learn more about history of Spain, scroll up and click the "add to cart" button