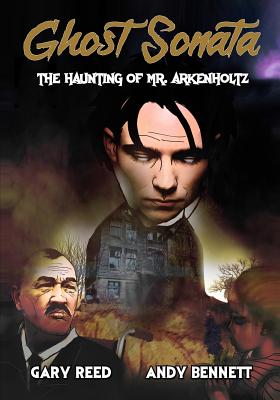 
Usually Ships in 1-5 Days
(This book cannot be returned.)
Based loosely on the work by August Strindberg, this is a surrealistic saga of a man who flashes back to the "defining moment" in his life where he found love, a future, terror and despair, all at the same time. A young man that finds himself on destiny's door as he is pulled into an ancient family feud and is surprised to find out that somehow he is involved. In Ghost Sonota, a young man named Isaac is born with a rare gift, the ability to sense the feelings and thoughts of others. It is because he is what, according to old wise-tales, is called a "Sunday Child". Isaac can almost tap into the minds of others around him and judge their emotions, their fears, and their doubts. But it is not a 'power' that he can simply control...it just washes over him. This is the story of that young man as he is plunged into a maze of secrets and despair from years gone past. For he ultimately becomes an unwillingly participant in the poisonous lies and deceit that have invaded the house. And when he falls in love with Adele, a girl living in the house, now he too becomes part of the legacy of torment that plagues the dwelling. Collects issues 1-4 of the comic book series. "There is superb human drama with unforgettable interactions between the characters in this story. This is a scary, but racy read, that skillfully combines old fashioned thrills, intrigue, murder, ambition and retribution " - Jazma Online. "Gary Reed's writing talent and creativity shine forth like a beacon on a dark foggy night..." - Independent Propaganda. "Gary Reed proves that he is the master of storytelling." - Paul Dale Roberts, Jazma. "Reed is one of the most underrated comic writers around." - The Comics Review.
GARY REED was the publisher of Caliber Comics, an independent comic company that helped to launch the career of dozens of today's top creators. As a writer, he did a number of Caliber titles including: Deadworld, Realm, Saint Germaine, Renfield, Raven Chronicles, and more. His collaboration with Guy Davis, Honour Among Punks: The Complete Baker Street was reprinted and distributed by Simon and Schuster. Gary also wrote two graphic novel adaptations for Penguin Books as part of their Puffin Classics line and these were Frankenstein with art by Frazier Irving and Dracula with art by Becky Cloonan. In addition to his comic career, Gary was also the Vice President of McFarlane Toys, former owner of four comic retail stores, and taught college level biology courses in the Detroit/Ann Arbor area. Gary past away in October 2016 and is survived by his wife Jennifer and four daughters. ANDY BENNETT has been working professionally as an illustrator since 1995. An Ohio native, he graduated from the Columbus Collage of Art and Design in 1995 with a BFA in illustration. His first comics work was in Caliber Comics' Negative Burn in 1995, followed by another Burn appearance in 1996. He has since expanded his resume to include nearly 20 comics from Caliber, and most recently a series of graphic novels from Moonstone Books. In the meantime, he has contributed illustrations, photos, and design work to such clients as Microsoft/Journeyman Press, Shelterhouse Records, Southern Ohio Light Opera, White Wolf Games, Atlas Games, and Steve Jackson Games. He currently resides in Columbus, Ohio with his wife, Lisa, two English Bull Terriers, and three cats.