Broken Icarus: The 1933 Chicago World's Fair, the Golden Age of Aviation, and the Rise of Fascism (Hardcover) 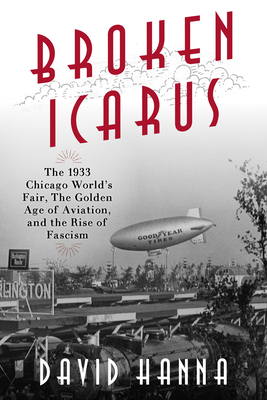 Broken Icarus: The 1933 Chicago World's Fair, the Golden Age of Aviation, and the Rise of Fascism (Hardcover)


Usually Ships in 1-5 Days
The 1930s still conjure painful images: the great want of the Depression, and overseas, the exuberant crowds motivated by self-appointed national saviors dressing up old hatreds as new ideas. But there was another story that embodied mankind in that decade. In the same year that both Adolf Hitler and Franklin D. Roosevelt came to power, the city of Chicago staged what was, up to that time, the most forward-looking international exhibition in history. The 1933 World's Fair looked to the future, unabashedly, as one full of glowing promise. No technology loomed larger at the Fair than aviation. And no persons at the Fair captured the public's interest as much as the romantic figures associated with it: Italy's internationally renowned chief of aeronautics, Italo Balbo; German Zeppelin designer and captain, Doctor Hugo Eckener; and the husband-and-wife aeronaut team of Swiss-born Jean Piccard and Chicago-born Jeannette Ridlon Piccard. This golden age of aviation and its high priests and priestesses portended to many the world over that a new age was dawning, an age when man would not only leave the ground behind, but also his uglier, less admirable heritage of war, poverty, corruption, and disease. It was only later in the decade that the dark correlation between the rise of some of aviation's superstars and the rise of fascism was to be revealed. But for a moment in 1933, this all lay in a future that still seemed so promising. In Broken Icarus, author David Hanna tracks the inspiring trajectory of aviation leading up to and through the World's Fair of 1933, as well as the field of flight's more sinister ties to fascism domestic and abroad to present a unique history that is both riveting and revelatory.
David Hanna teaches history at Stuyvesant High School in Lower Manhattan. He is a recipient of the New York Times Teachers Make a Difference award and the University of Chicago's Outstanding Educator award. Hanna is the author of Knights of the Sea: The True Story of the Boxer and the Enterprise and the War of 1812, which New York Magazine's "Approval Matrix" categorized as "high-brow, brilliant," and Rendezvous with Death: The Americans Who joined the Foreign Legion in 1914 to Fight For France and For Civilization. As a result of his work on the latter book, he was invited to collaborate with the United States World War One Centennial Commission. He has been a featured speaker at the Smithsonian's National Portrait Gallery among many others. He lives in Morris County, New Jersey with his wife and two sons.