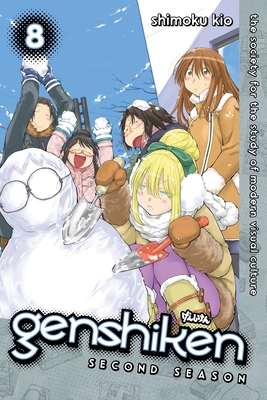 This is book number 8 in the Genshiken: Second Season series.

In the middle of February comes the dreaded Valentine's Day–a milestone for sweethearts, but a house of horrors for every introverted otaku. However, with so much love in the air for Genshiken, this previously-feared holiday becomes an all-new battleground for chocolate exchanges and romantic advances. Perhaps the most aggressive of all is Keiko, who is determined not to land in second place for Madarame's affections, much less lose to a boy!
Shimoku Kio is a Japanese manga artist who is most well known for Genshiken and its spin-off, Kujibiki Unbalance, both of which exist in manga and anime/original video animation form. He is also known for the manga series Digopuri and Kagerowic Diary.