Something in the Blood: The Untold Story of Bram Stoker, the Man Who Wrote Dracula (Paperback) 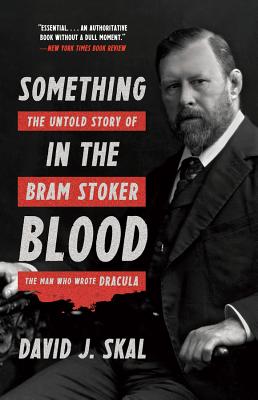 Something in the Blood: The Untold Story of Bram Stoker, the Man Who Wrote Dracula (Paperback)

Shortlisted for the Edgar Award (Critical/Biographical)

A revelatory biography exhumes the haunted origins of the man behind the immortal myth, bringing us "the closest we can get to understanding [Bram Stoker] and his iconic tale" (The New Yorker).

In this groundbreaking portrait of the man who birthed an undying cultural icon, David J. Skal "pulls back the curtain to reveal the author who dreamed up this vampire" (TIME magazine). Examining the myriad anxieties plaguing the Victorian fin de siecle, Skal stages Bram Stoker’s infirm childhood against a grisly tableau of medical mysteries and horrors: cholera and famine fever, childhood opium abuse, frantic bloodletting, mesmeric quack cures, and the gnawing obsession with "bad blood" that pervades Dracula. In later years, Stoker’s ambiguous sexuality is explored through his passionate youthful correspondence with Walt Whitman, his adoration of the actor Sir Henry Irving, and his romantic rivalry with lifelong acquaintance Oscar Wilde—here portrayed as a stranger-than-fiction doppelgänger. Recalling the psychosexual contours of Stoker’s life and art in splendidly gothic detail, Something in the Blood is the definitive biography for years to come.

David J. Skal is one of the world’s preeminent authorities on Bram Stoker, Dracula, and monsters in popular culture. His book Hollywood Gothic: The Tangled Web of Dracula from Novel to Stage to Screen (Norton, 1990) was hailed as “the ultimate book on Dracula” by Newsweek; The Monster Show: A Cultural History of Horror (Norton, 1993) has had multiple translations and is widely considered the standard historical and critical survey. As a filmmaker, he has written, produced, and directed a dozen DVD and Blu-ray documentaries on Universal’s classic horror and science fiction films, as well as a behind-the-scenes chronicle of the Academy Award–winning film Gods and Monsters. Skal has guest-lectured extensively at major colleges, universities, and cultural organizations in North America and Europe, with speaking engagements at sites such as the Huntington Library, the British Library, and the Musée du Louvre. He has additionally taught courses based on his books at the University of Victoria and Trinity College Dublin, where he was also appointed a Long Room Hub Visiting Research Fellow for Something in the Blood: The Untold Story of Bram Stoker (Liveright, 2016), chosen by the Mystery Writers of America as a 2017 Edgar Award finalist for biography and criticism. His official website is monstershow.net.

A keepsake for any Dracula enthusiast.
— Seattle Times

Skal proves to be an ideal guide…surely successful in his efforts to revivify his subject and to reveal that even those shadows we think we know may contain obscurities that move of their own volition and which, tantalizingly, remain just out of sight.
— Times Literary Supplement

Sharply written, well-researched (with judicious use of recent discoveries), attentive to detail, and entertaining to read. Skal’s is the finest, most balanced biography of Bram Stoker yet written.
— Sir Christopher Frayling, author of Vampyres: Lord Byron to Count Dracula and Nightmare: The Birth of Horror