In Search of Lost Time: In the Shadow of Young Girls in Flower (Paperback) 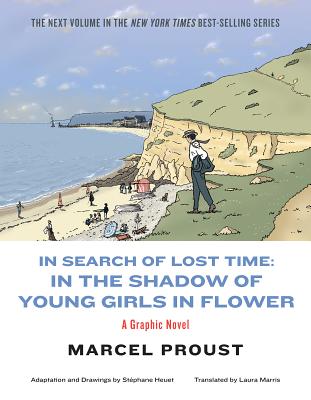 In Search of Lost Time: In the Shadow of Young Girls in Flower (Paperback)

In what renowned translator Arthur Goldhammer called “a piano reduction of an orchestral score,” the first volume of Stéphane Heuet’s adaptation of In Search of Lost Time electrified the graphic community like no other—re-presenting the novel for anyone who has always dreamed of reading Proust but was put off by the sheer magnitude of the undertaking. Whereas the first volume described the narrator’s childhood in the pastoral town of Combray, the second volume portrays the narrator’s foray into adolescence, set in the opulent seaside resort of Balbec. Preserving Proust’s original dissection of the spontaneity of youth, translator Laura Marris captures the narrator’s infatuation with his playmates—his memories of their intoxicating afternoons together unfolding as if in a dream. Featuring some of Proust’s most memorable characters—from mysterious Charlus to beguiling young Albertine—this second volume becomes a necessary companion piece for any lover of modern literature.

Marcel Proust (1871–1922) was a French novelist, essayist, and critic, most famous for his autobiographical series of novels, In Search of Lost Time.

Stéphane Heuet is a French comic artist who is five volumes into his comic adaptation of In Search of Lost Time. He lives in Paris.

Laura Marris is an award-winning writer and translator who teaches creative writing at Boston University.