Something in the Blood: The Untold Story of Bram Stoker, the Man Who Wrote Dracula (Hardcover) 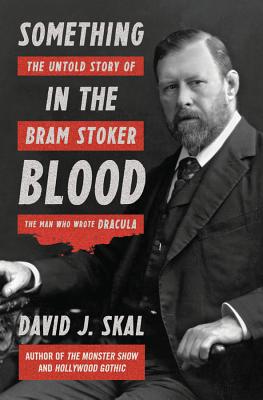 Something in the Blood: The Untold Story of Bram Stoker, the Man Who Wrote Dracula (Hardcover)

A groundbreaking biography reveals the haunted origins of the man who created Dracula and traces the psychosexual contours of late Victorian society.

First published in 1897, Dracula has had a long and multifaceted afterlife—one rivaling even its immortal creation; yet Bram Stoker has remained a hovering specter in this pervasive mythology. In Something in the Blood, David J. Skal exhumes the inner world and strange genius of the writer who birthed an undying cultural icon, painting an astonishing portrait of the age in which Stoker was born—a time when death was no metaphor but a constant threat easily imagined as a character existing in flesh and blood.

Just as in his celebrated histories The Monster Show and Hollywood Gothic, Skal draws on a wealth of newly discovered documents with "the skills of a fine detective" (New York Times Book Review) to challenge much of our accepted wisdom about Dracula, Stoker, and the late Victorian age. Staging Stoker’s life against a grisly tableau of the myriad anxieties plaguing the Victorian fin de siecle, Skal investigates Stoker’s "transgendered imagination," unearthing Stoker’s unpublished, sexually ambiguous poetry and his passionate youthful correspondence with Walt Whitman—printed in full here for the very first time.

Born into a middle-class Protestant family in Dublin in "Black 47"—the year the potato famine swept the country—Stoker was inexplicably paralyzed as a boy, and his early years unfold alongside a parade of Victorian medical mysteries and horrors: cholera and typhus, frantic bloodletting, mesmeric quack cures, and the gnawing obsession with “bad blood” that colors Dracula. While destined to become best known for his legendary undead count, Bram Stoker would become a prolific writer, critic, and theater producer, rubbing shoulders with Henry Irving, Hall Caine, and Lady Jane Wilde and her salon set—including her fated-to-be-infamous son Oscar.

In this probing psychological and cultural portrait of the man who brought us one of the most memorable monsters in history, Skal reveals a lifetime spent wrestling with the greatest questions of an era—a time riddled by disease, competing attitudes toward sex and gender, and unprecedented scientific innovation accompanied by rising paranoia and crises of faith. Stoker’s battle resulted in a resilient modern folktale that continues to shock and enthrall; perhaps the most frightening thing about Dracula, Skal writes, "is the strong probability that it meant far less to Bram Stoker than it has come to mean to us."

David J. Skal is one of the world’s preeminent authorities on Bram Stoker, Dracula, and monsters in popular culture. His book Hollywood Gothic: The Tangled Web of Dracula from Novel to Stage to Screen (Norton, 1990) was hailed as “the ultimate book on Dracula” by Newsweek; The Monster Show: A Cultural History of Horror (Norton, 1993) has had multiple translations and is widely considered the standard historical and critical survey. As a filmmaker, he has written, produced, and directed a dozen DVD and Blu-ray documentaries on Universal’s classic horror and science fiction films, as well as a behind-the-scenes chronicle of the Academy Award–winning film Gods and Monsters. Skal has guest-lectured extensively at major colleges, universities, and cultural organizations in North America and Europe, with speaking engagements at sites such as the Huntington Library, the British Library, and the Musée du Louvre. He has additionally taught courses based on his books at the University of Victoria and Trinity College Dublin, where he was also appointed a Long Room Hub Visiting Research Fellow for Something in the Blood: The Untold Story of Bram Stoker (Liveright, 2016), chosen by the Mystery Writers of America as a 2017 Edgar Award finalist for biography and criticism. His official website is monstershow.net.

Sharply written, well-researched (with judicious use of recent discoveries), attentive to detail, and entertaining to read. Skal’s is the finest, most balanced biography of Bram Stoker yet written.
— Sir Christopher Frayling, author of Vampyres: Lord Byron to Count Dracula and Nightmare: The Birth of Horror