Lockdown: The Socialist Plan to Take Away Your Freedom (Hardcover) 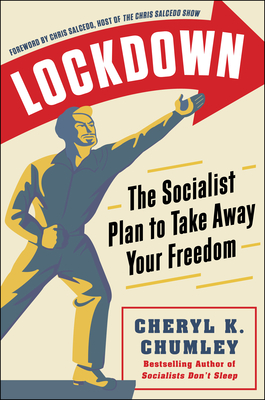 Lockdown: The Socialist Plan to Take Away Your Freedom (Hardcover)


Usually Ships in 1-5 Days
"A crucial warning for Americans about the left's never-ending lust to steal individual liberties -- and the power of God to stop it." -- Everett Piper, Bestselling Author of Grow Up

Lockdown is a terrifying story of not only the chaotic freefall of American freedoms during the opening stages of the COVID pandemic, but the dangerous growth of government power that continues today.

Lockdown is a warning that the extraordinary powers invoked by left-wing Democrats and others, justified by claims of public health and safety, have begun the unravelling of America's constitutional order and our most cherished freedoms.

Using COVID-19 as a cover, Democrat leaders and their bureaucratic health advisers seized powers the Constitution never gave them, and ordered citizens to stay off streets and out of public parks, banned them from their workplaces, closed down their schools, and made church attendance a crimes -- even as these same leaders and their left-leaning cronies blithely, arrogantly, and outrageously allowed mass protests, kept open abortion clinics and did as they pleased.

Relying on her trademark aggressive reporting style, Cheryl K. Chumley explains how the radical left is using pandemic policies as a template for increasing controls over the lives of citizens as they build a one-party, socialist state in America.

A sequel to her bestselling book Socialists Don't Sleep, in Lockdown, Chumley exposes how hypocritical, elitist, and radical leftists are still using the coronavirus to score political points and steal individual rights - as the original pandemic served as dress rehearsal in the march toward the new fascism.

Chris Salcedo is a veteran broadcaster, author and a political analyst. The Chris Salcedo Shows can be heard on AM 700 KSEV, Houston and on 820 AM WBAP in Dallas/Fort Worth. You can also watch your "Liberty Loving Latino," on Newsmax at 8 AM to 10 AM Eastern. A graduate of San Diego State University, Salcedo got started in radio in news and traffic. From there he began his career in television doing weather on XETV, San Diego's Fox 6. He has filled in for the nationally syndicated Glenn Beck, Andrea Tantaros and Roger Hedgecock radio shows. Salcedo's news experience extends past being one of the few weather men in the nation to do a hard-hitting story on Social Security. He was a news anchor in the 5th largest TV market in the nation at CBS11/TXA 21 in DALLAS/FORT WORTH. He moved to Washington D.C. to take an anchor position on the nationally syndicated America's Radio News Network.Currently, Salcedo is the executive Director of the Conservative Hispanic Society. And he is the author of LIBERTY RISES.www.chrissalcedo.comwww.newsmaxtv.com/Shows/The-Chris-Salcedo-Show