Accused!: The Trials of the Scottsboro Boys: Lies, Prejudice, and the Fourteenth Amendment (Hardcover) 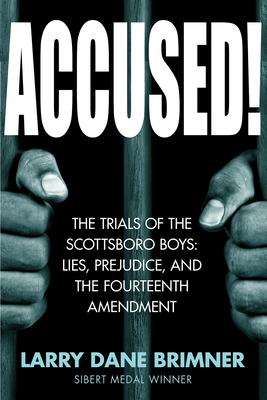 Accused!: The Trials of the Scottsboro Boys: Lies, Prejudice, and the Fourteenth Amendment (Hardcover)

This chilling and harrowing account tells the story of the Scottsboro Boys, nine African-American teenagers who, when riding the rails during the Great Depression, found their lives destroyed after two white women falsely accused them of rape. Award-winning author Larry Dane Brimner explains how it took more than eighty years for their wrongful convictions to be overturned.

In 1931, nine teenagers were arrested as they traveled on a train through Scottsboro, Alabama. The youngest was thirteen, and all had been hoping to find something better at the end of their journey. But they never arrived. Instead, two white women falsely accused them of rape. The effects were catastrophic for the young men, who came to be known as the Scottsboro Boys. Being accused of raping a white woman in the Jim Crow south almost certainly meant death, either by a lynch mob or the electric chair. The Scottsboro boys found themselves facing one prejudiced trial after another, in one of the worst miscarriages of justice in U.S. history. They also faced a racist legal system, all-white juries, and the death penalty. Noted Sibert Medalist Larry Dane Brimner uncovers how the Scottsboro Boys spent years in Alabama's prison system, enduring inhumane conditions and torture. The extensive back matter includes an author's note, bibliography, index, and further resources and source notes.
Larry Dane Brimner is the award-winning author of a number of civil rights and social justice titles for Calkins Creek, including Blacklisted!: Hollywood, the Cold War, and the First Amendment; Twelve Days in May, the 2018 Robert F. Sibert Medal Winner; STRIKE! The Farm Workers' Fight for Their Rights; Black & White: The Confrontation between Reverend Fred L. Shuttlesworth and Eugene "Bull" Connor, the 2012 Robert F. Sibert Honor Winner; Birmingham Sunday, and We Are One: The Story of Bayard Rustin.
★ "Brimner revisits the history of injustice in America... (and) has extensively researched the heartbreaking story of the suffering and stolen futures of nine African American teens falsely accused of the rape of two white women in Alabama in 1931, laying all the facts on the table in a concise, gripping volume. The engaging, easy-to-follow text will draw readers into a historical account that mirrors many of today's headlines.... (t)he parallels between the perils the Scottsboro Boys endured and current news stories show the continued relevance of this history, making this a must-have for both school and public libraries. Engaging and historically accurate; highly recommended."  -- Kirkus Reviews, starred review

★ "Brimner, who won the 2018 Sibert Award for his book Twelve Days in May: Freedom Ride 1961 now looks at the case of the Scottsboro boys... Brimner has his work cut out for himself in telling this complicated story... (and) gives the narrative both heft and heart. The book's design uses black-and-white photos to good advantage. A solid look at a noteworthy event that touched upon many aspects of U.S. society." -- Booklist, starred review


★ "Tightly wound, compelling, and comprehensive, Brimner’s meticulously documented narrative re-creates the menacing atmosphere of Depression-era segregated courtrooms, atrocious carceral facilities, and a riven public. Extensive quotations offer a sense of each historical figure’s character, from the boys on trial and their accusers to the officials handling cases and the captivated press. The text is enhanced with plentiful photographs, period news accounts and ephemera, and helpful sidebars offering broader context. Brimner draws parallels between the Scottsboro boys and present situations, reminding readers how far we’ve come—and how we continue to come up short. This masterly account of an egregious episode in American history is (and will remain) vital reading. An essential acquisition." -- School Library Journal, starred review

"Brimner’s skillful use of quotes... give the tale an engrossing urgency and pulls the events out of history books and into a compelling narrative. The mostly chronological format is easily accessible...(t)his has obvious curricular use, but it might also serve as a discussion-starting comparison between historical and current racial inequalities in the justice system." -- The Bulletin of the Center for Children's Books

"This is an emotionally wrenching story... (and) a needed book in any school library, for it shows the dangers of unfettered racism." -- School Library Connection