A Band of Misfits: Tales of the 2010 San Francisco Giants (Paperback) 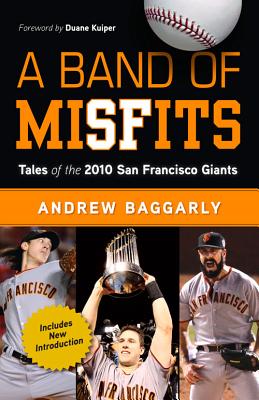 A Band of Misfits: Tales of the 2010 San Francisco Giants (Paperback)


Email or call for price
With a title drought that started in New York and carried on for more than five decades after the move to the west coast, the San Francisco Giants and their fans were growing restless, waiting for a team like the 2010 roster and that one magical postseason run. The anticipation, memories, and celebrated relief of the season when it finally came together are captured in this chronicle of the World Series season of the Giants. Written in entertaining prose, the book is as much an enjoyable story to be reread through the years as it is a factual account of the events that brought the elusive title to the Giants.
Andrew Baggarly is the San Francisco Giants beat reporter for Comcast SportsNet Bay Area and has covered the team for the past 10 years. He formerly wrote for the Oakland Tribune and the San Jose Mercury News. He is a member of the Baseball Writers Association of America and a voter for the Baseball Hall of Fame. He lives in Millbrae, California.