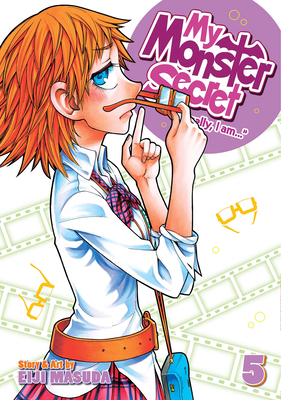 This is book number 5 in the My Monster Secret: Actually, I Am... series.

A high school rom-com with monsters! My Monster Secret is a new, ongoing manga series that combines both supernatural and extraterrestrial elements in a high school romantic comedy setting. Published in Japan by Akita Shoten in the Weekly Shounen Champion magazine, My Monster Secret has met with critical acclaim, with each new volume ranking highly on Japanese bestseller lists. Each volume of the manga features a charmingly eccentric art style and contains color inserts.High school student Kuromine Asahi is the kind of guy who literally cannot tell a lie. Whether it's trying to maintain a poker face in a simple game of cards or keeping scurrilous gossip to himself, Asahi is a total failure when it comes to the art of deception.So what happens when he stumbles upon the most shocking secret of his life? When Asahi learns that Shiragami Youko, a beautiful girl of few words, is actually a vampire, can Asahi possibly keep his lips sealed?
Eiji Masuda is a Japanese manga-ka best known as the creator of My Monster Secret.
"My Monster Secret is comfort food done right." --Nick Creamer, Anime News Network