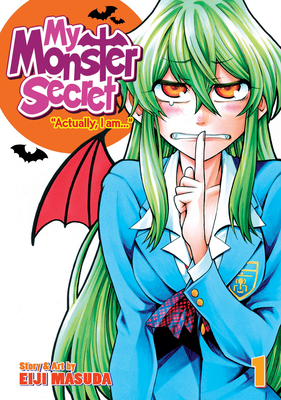 This is book number 1 in the My Monster Secret: Actually, I Am... series.

A high school rom-com with monsters! LIAR LIAR Everyone knows Asahi is the worst liar in school–he’s so painfully transparent that his childhood frenemy has developed gossip tabloids around his best kept secrets. When Asashi falls in love with the enigmatic Shiragami Youko from his class, he decides to confess to her before she, and everyone else, can read his feelings like an open book. There’s just one problem–Asashi stumbles upon her secret, and it’s a lot bigger than his! Youko is, in fact, a vampire, and if the school finds out, she’ll disappear from his life forever.
Eiji Masuda is the artist and illustrator of My Monster Secret.