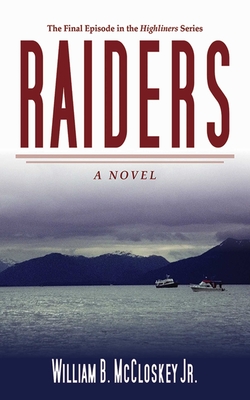 By William B. McCloskey

Set amongst the tumult of the early 1980s, Raiders follows the struggles of the Alaskan fishermen as they regain control of their fishing grounds from the fleets of foreign companies, who have been plundering their bays. But such companies aren’t deterred, and instead contract American boats to catch the fish for them. In order to keep his family afloat—he swears—Hank signs on with a Japanese firm.

Shunned as a traitor by his peers, Hank keeps on fishing. Their disgust and his tainted ethics will all be worth it for the chance to keep on fishing. But when Hank begins to suspect that his new employers are playing a political game—and playing him as the pawn—he must confront the possibility that in order to find redemption, he’ll have to sacrifice all he has.

In this masterful finale to the Highliners series, McCloskey takes on the all-too-real horrors of the seafaring life: storms that can sink a ship, giant fish that can snap a man’s arm. For anyone in love with the Alaskan backdrop, the feel of hauling in fish, or traveling the ever-changing sea, Raiders is a story to read, cherish, and never forget.
William B. McCloskey Jr. has worked on pitching decks all over the world, with crews of many nations. His work has appeared in Smithsonian, Atlantic Monthly, New York Times Magazine, Audubon, International Wildlife, National Fisherman, Fishing News International (London), and elsewhere. His epic saga originates with Highliners and includes the sequels Breakers and Raiders.