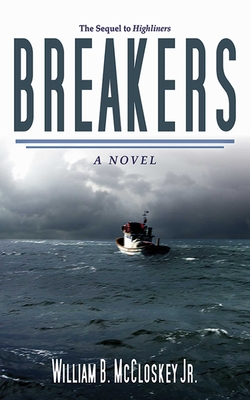 By William B. McCloskey


Email or call for price
William McCloskey’s bestselling novel Highliners established him as an authority on the dangers and hardships of the Alaskan fishing industry. Now in an epic sequel, Breakers returns to Kodiak to chart the fortunes of McCloskey’s beloved characters as they make their living from the sea.

A respected skipper, Hank Crawford runs his own boat and is well liked by his crew. Yet Hank knows all too well that with a hefty mortgage to pay off, a brand-new boat, and an even newer baby, he and his family need the crab and salmon to keep coming into their nets.

But as every fisherman knows, the sea is a fickle mistress. The crab season is the poorest yet, and salmon prices drop. When his child falls ill and his boat gets damaged, Hank journeys in desperation to his partners in Japan. Here he faces a moral crossroads: compromise his own business ethics or risk losing everything he’s worked for.
With the same thrill of danger, McCloskey captures the excitement, the drama, and the never-ending fears that are the landmarks of the commercial fisherman’s trade. Breakers is truly a triumphant addition to the saga Highliners sets in motion.
William B. McCloskey Jr. has worked on pitching decks all over the world, with crews of many nations. His work has appeared in Smithsonian, Atlantic Monthly, New York Times Magazine, Audubon, International Wildlife, National Fisherman, Fishing News International (London), and elsewhere. His epic saga originates with Highliners and includes the sequels Breakers and Raiders.