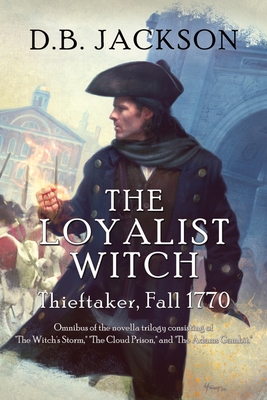 After a summer of conflict and innumerable delays, the trial of the British soldiers responsible for Boston's bloody massacre is set to begin. On the eve of the proceedings, however, magickal attacks on the lawyers representing both sides threaten to thwart justice yet again.

Ethan Kaille-thieftaker and conjurer-is hired by Samuel Adams himself to protect the attorneys, a task more perilous than either of them knows. For a new conjurer has come to Boston. Ruthless, canny, beautiful, possessed of spellmaking talent that dwarfs Ethan's own, she is driven by dark ambitions that will brook no interference.

Now Ethan finds himself fighting for his own life, the lives of those who matter to him most, and the very survival of his city. He must master new magicks and trust in powers he never knew existed. And he must do so before the Patriot cause and its greatest champions are destroyed.

The Loyalist Witch: Thieftaker, Fall 1770 collects in a single volume the novella trilogy consisting of "The Witch's Storm," "The Cloud Prison," and "The Adams Gambit," the latest Thieftaker adventures from critically-acclaimed author D.B. Jackson