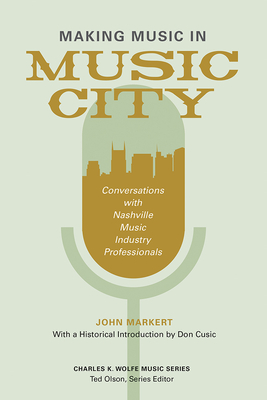 At least since the rise of the “Nashville sound” in the 1950s, Tennessee’s capital city has attracted numerous books and articles offering insight into the celebrity machine known as Music City. But behind the artist in the limelight are a host of support personnel and contributors who shape the artist’s music. Of these myriad occupations within the music industry, only two have received significant attention: executives at the major labels and elite songwriters who have forged a path to the top of the charts. In Making Music in Music City, sociologist John Markert compiles and assesses more than one hundred interviews with industry professionals whose roles have been less often examined: producers, publishers, songwriters, management, studio musicians, and more.

The book naturally pivots around the country music industry but also discusses Nashville’s role in other forms of modern music, such as rock, Christian, and rap. Markert’s in-depth interviews with key music professionals provide a fresh perspective on the roles of critical players in Nashville’s music industry. This book sheds light not only on the complexities of the industry and the occupational changes taking place but on the critical role of those who work behind the scenes to shape the music that ultimately reaches the public.

Through firsthand accounts, Making Music in Music City analyzes just what it takes to create, produce, and disseminate the Nashville sound.

JOHN MARKERT was for thirty years an associate professor of sociology at Cumberland University. He is the author of Publishing Romance: The History of the Industry, 1940 to Present, Hooked in Film: Substance Abuse on the Big Screen, and Post-9/11 Cinema: Through a Lens Darkly.