Two Patients: My Conversion from Abortion to Life-Affirming Medicine (Paperback) 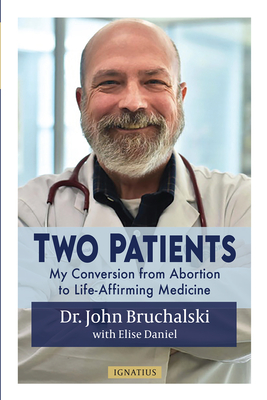 Two Patients: My Conversion from Abortion to Life-Affirming Medicine (Paperback)

After a terrible misjudgment in the delivery room, Dr. John Bruchalski realized that with every pregnant woman he attends, there are two patients--the mother and her unborn child. In addition to this discovery, two remarkable spiritual experiences deepened his understanding of the kind of man he had become and the one he was called to be.

Two Patients is the story of how a physician who practiced abortion came to question the medical status quo and to pioneer an approach to reproductive medicine that respects female fertility, honors the dignity of unborn children, and o­ ers care to patients regardless of their financial situation. Such health care, writes Dr. John Bruchalski, is merciful medicine, and his memoir gives a glimpse of just how merciful the relationship between a doctor and his two patients--mother and child-- can be.

John Bruchalski, M.D., earned his medical degree from the University of South Alabama College of Medicine in 1987. He completed his OB/GYN residency at Eastern Virginia Medical Center and the Jones Institute for Reproductive Medicine in Norfolk, Virginia, in 1991. He received board certification in 1993. He is the Founder and President of Divine Mercy Care and the Founder of Tepeyac OB/GYN in Fairfax, Virginia. Elise Daniel is a writer and a co-founder of Bellwether Communications. She lives with her husband and children in northern Virginia