The Art of Auditioning, Second Edition: Techniques for Television (Paperback) 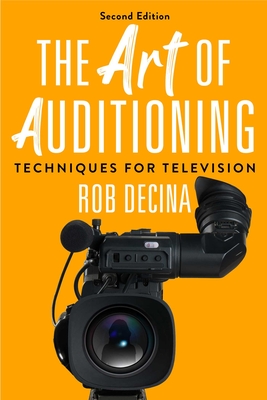 The Art of Auditioning, Second Edition: Techniques for Television (Paperback)


Usually Ships in 1-5 Days
Learn how to ace your acting audition from a top casting director!

Casting director Rob Decina highlights the difference between the craft of acting and the business of auditioning, and how those two worlds meet in television. Included are proven-effective preparation techniques, such as breaking down a scene, making specific choices, finding the acting moments with thoughts and feelings, and much more. Also included is advice on how to navigate the various steps of auditioning for series regular, guest star, and co-star roles, and an examination of the differences between audition preparation and theatrical preparation and training. In-depth information on how to succeed with on-camera and self-tape auditions is also provided.

This second edition includes both new and updated tips, as well as reflections on the original edition’s advice. Most importantly, Rob explains a new short-form version of his audition technique as an effort to streamline the process for faster and more creative results.
ROB DECINA is a New York-based television casting director and executive with almost thirty years of experience. His career has spanned from primetime television, daytime drama, and film, to casting for one of the most prolific television studios for dramas and comedies. He has credits across several networks, cable, and streaming platforms including CBS, NBC, The CW Network, Showtime, Paramount+, Netflix, Disney+, and Apple TV.