The Fear of Too Much Justice: Race, Poverty, and the Persistence of Inequality in the Criminal Courts (Hardcover) 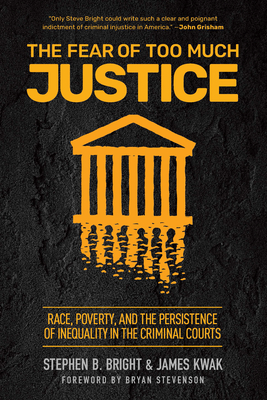 The Fear of Too Much Justice: Race, Poverty, and the Persistence of Inequality in the Criminal Courts (Hardcover)

"An urgently needed analysis of our collective failure to confront and overcome racial bias and bigotry, the abuse of power, and the multiple ways in which the death penalty's profound unfairness requires its abolition. You will discover Steve Bright's passion, brilliance, dedication, and tenacity when you read these pages."--from the foreword by Bryan Stevenson

Glenn Ford, a Black man, spent thirty years on Louisiana's death row for a crime he did not commit. He was released in 2014--and given twenty dollars--when prosecutors admitted they did not have a case against him.

Ford's trial was a travesty. One of his court-appointed lawyers specialized in oil and gas law and had never tried a case. The other had been out of law school for only two years. They had no funds for investigation or experts. The prosecution struck all the Black prospective jurors to get the all-white jury that sentenced Ford to death.

In The Fear of Too Much Justice, legendary death penalty lawyer Stephen B. Bright and legal scholar James Kwak offer a heart-wrenching overview of how the criminal legal system fails to live up to the values of equality and justice. The book ranges from poor people squeezed for cash by private probation companies because of trivial violations to people executed in violation of the Constitution despite overwhelming evidence of intellectual disability or mental illness. They also show examples from around the country of places that are making progress toward justice.

With a foreword by Bryan Stevenson, who worked for Bright at the Southern Center for Human Rights and credits him for " breaking] down the issues with the death penalty simply but persuasively," The Fear of Too Much Justice offers a timely, trenchant, firsthand critique of our criminal courts and points the way toward a more just future.