The Hermetic Science of Transformation: The Initiatic Path of Natural and Divine Magic (Hardcover) 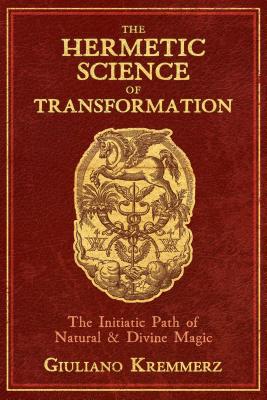 The Hermetic Science of Transformation: The Initiatic Path of Natural and Divine Magic (Hardcover)


Usually Ships in 1-5 Days
A classic initiatic primer for the serious magical aspirant, available now for the first time in English

• Explains how initiation into the hermetic science transforms the novice not only mentally but also physically, altering even the very fluids of the body

• Offers a return to the original hermetic path of initiation, following the strict procedures and symbolism as defined in the spiritual practices of Pythagoras and his tradition

The main purpose of the hermetic science, as seen by Giuliano Kremmerz (1861-1930), Italian alchemist, hermeticist, philosopher, and member of the Ur Group, is to allow the adept to concentrate on the natural and divine magic that will allow him or her to develop the latent powers innate in every human being. The initiatory path this opens, one the author compares to the Royal Way of Alchemy, transforms the novice not only mentally but also physically, altering even the very fluids of his or her body. For Kremmerz, magic is the supreme science, the highest expression of what exists and what is possible.

With this book, first published in Italian in 1897 and available here for the first time in English, Kremmerz sought to redefine magical initiation as well as other key components of the occult sciences. His aim was to bring the hermetic path of initiation back into alignment with the strict procedures and symbolism that defined the spiritual practices of Pythagoras and the heirs to his tradition. He visualized the initiate as a disciple who has escaped the stagnant water in which the rest of humanity is immersed and entered a state of non-ordinary consciousness, one that allows for the successful pursuit of realization and contact with the magical will.

In this transformative initiatory guide, Kremmerz details the occult purification and preparation the path of natural and divine magic requires. The spiritual course advocated by Kremmerz is arduous--to move forward on the path of true realization, one that will allow the initiate to “climb to heaven” while still alive, the aspirant must commit to total severance from everyday life. Yet Kremmerz’s words themselves serve to trigger the beginning of transformation within us, making the very act of reading this primer the first step on the path of initiation into the hermetic science.
Giuliano M. Kremmerz (1861-1930), also known as J. M. Kremm-Erz and born as Ciro Formisano, was an Italian alchemist, hermeticist, philosopher, and prominent member of the Ur Group, alongside Julius Evola. He was initiated into the mysteries of the Sacred Science by Pasquale De Servis, known as Izar, and published writings on natural and divine magic through the journal Il Mondo Secreto. In 1896 he founded the Schola Philosophica Hermetica Classica Italica and its associated body Fratellanza Terapeutica Magica di Miriam (Therapeutic and Magic Brotherhood of Miriam), a school and group still in operation in Italy today.
Every student of magic should be aware of Kremmerz's synthesis of self-deification with esoteric Christianity. This fine translation brings the reclusive sage at last to a wider audience. The demands of this path are formidable, beginning with the complete inner separation from modern life and its conventions. Yet Simply knowing of it can save one from many errors and delusions, both in the philosophic and the practical realm.
— Joscelyn Godwin, translator of Introduction to Magic, Volume II by Julius Evola and the UR Group

It is time that Giuliano Kremmerz--the other great master of initiatic magic in Itlay, besides Julius Evola, and founder of the Brotherhood of Myriam--is properly introduced to the anglephone world. The Hermetic Science of Transformation presents a thoughtful selection of Kemmerz’s writings, which includes his main doctrines and practical teachings.
— Hans Thomas Hakl, Austrian publisher, essayist, and author of Eranos