Edward FitzGerald's Rubaiyat of Omar Khayyam: With Paintings by Lincoln Perry and an Introduction and Notes by Robert D. Richardson (Hardcover) 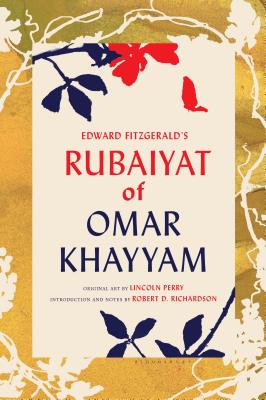 Edward FitzGerald's Rubaiyat of Omar Khayyam: With Paintings by Lincoln Perry and an Introduction and Notes by Robert D. Richardson (Hardcover)

A work of staggering poetic beauty that has inspired the likes of John Ruskin, T. S. Eliot, and Robert Bly, The Rubaiyat of Omar Khayyam was written in eleventh-century Persia and was largely unknown in the West until it was translated into English by Edward FitzGerald in 1859. In FitzGerald's hands, the individual Persian quatrains of the original coalesced into one of the most moving and often-cited modern poetic statements about loss, longing, and nostalgia. As Robert D. Richardson notes, The Rubaiyat is startlingly modern in its outlook and composition, and through it, one civilization speaks to another as equals and across a gap of almost a thousand years.

Annotated by Richardson and illustrated beautifully with the elegant watercolors of Lincoln Perry, this edition of The Rubaiyat of Omar Khayyam will bring this affirmed classic to a new generation of readers. It is the perfect complement to Richardson's "biography" of The Rubaiyat, Nearer to the Heart's Desire.

Robert D. Richardson is the author of William James: In the Maelstrom of American Modernism, Emerson: The Mind on Fire, and Henry Thoreau: A Life of the Mind. He has edited anthologies such as Three Centuries of American Poetry and Ralph Waldo Emerson: Selected Essays, Lectures, and Poems.

Lincoln Perry has shown at galleries across the country. His watercolors appeared in the illustrated edition of October, or Autumnal Tints by Henry David Thoreau with an introduction by Robert D. Richardson.

"The Bloomsbury edition is a delight . . . This is a Rubaiyat that will please longtime fans and new readers alike." - Shelf Awareness

"In Richardson, the philosopher has found a tireless champion and a perceptive editor. Richardson is that increasingly rare phenomenon among academics, an enthusiast, even a lover, of his subjects." - John Banville, The New York Review of Books on THE HEART OF WILLIAM JAMES

"To read this book is to be touched on the shoulder by a thousand years of poetry and thought . . . This book is unforgettable; it is essential." - Mary Oliver on EMERSON: THE MIND ON FIRE

"A splendidly written book . . . Richardson's critical discussion . . . casts a new light on Thoreau's sometimes cross-grained but fascinating personality." - The Boston Globe on HENRY THOREAU: A LIFE OF THE MIND

"Lincoln Perry is a contemporary painter possessed by learning from the past and translating it into something new." - Art New England

"Perry's murals are a moving tribute to the whole classical tradition from Phidias through Raphael, Veronese, Poussin, Ingres, and Degas." - David Summers, author of VISION, REFLECTION, AND DESIRE IN WESTERN PAINTING