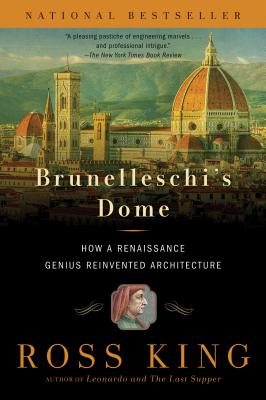 The New York Times bestselling, award winning story of the construction of the dome of Santa Maria del Fiore in Florence and the Renaissance genius who reinvented architecture to build it.

On August 19, 1418, a competition concerning Florence's magnificent new cathedral, Santa Maria del Fiore was announced: "Whoever desires to make any model or design for the vaulting of the main Dome....shall do so before the end of the month of September." The proposed dome was regarded far and wide as all but impossible to build: not only would it be enormous, but its original and sacrosanct design shunned the flying buttresses that supported cathedrals all over Europe. The dome would literally need to be erected over thin air.

Of the many plans submitted, one stood out--a daring and unorthodox solution to vaulting what is still the largest dome in the world. It was offered not by a master mason or carpenter, but by a goldsmith and clockmaker named Filippo Brunelleschi, then forty-one, who would dedicate the next twenty-eight years to solving the puzzles of the dome's construction. In the process, he reinvented the field of architecture.

Brunelleschi's Dome is the story of how a Renaissance genius bent men, materials, and the very forces of nature to build an architectural wonder we continue to marvel at today. Award-winning, bestselling author Ross King weaves this drama amid a background of the plagues, wars, political feuds, and the intellectual ferments of Renaissance Florence to bring the dome's creation to life in a fifteenth-century chronicle with twenty-first-century resonance.

Born and raised in Canada, Ross King has lived in England since 1992. In 2002—03, two books of his were published in the United States, Domino, about the world of masquerades and opera in 18th century London and the New York Times bestselling Michelangelo and the Pope's Ceiling.

Nominated for a National Book Critics Circle Award in 2003 in the category of critisicm, in Michelangelo and the Pope's Ceiling King tells the story of the four years—1508-1512.—Michelangelo spent painting the ceiling of the newly restored Sistine chapel. In this extraordinary book, he presents a magnificent tapestry of day-to-day life of the ingenious Sistine scaffolding and outside in the upheaval of early 16th century Rome.

King’s highly acclaimed Brunelleschi’s Dome: How a Renaissance Genius Reinvented Architecture, was an instant hit in the U.S., landing on the New York Times, Boston Globe and San Francisco Chronicle bestseller lists and becoming a handselling favorite among booksellers. Brunelleschi’s Dome was chosen "The 2000 Book Sense Nonfiction Book of the Year" and a Book Sense 76 top ten selection.

Anyone familiar with Ross King’s writing knows that he has an astonishing knowledge of European cultural history. He originally planned a career in academia, earning his Ph.D. in English Literature and moving to England to assume a research position at the University of London.

King lives near Oxford, England, in the historic town of Woodstock, the site of Blenheim Palace. He is a devoted cyclist and hikes regularly in both the Pyrenees and the Canadian Rockies.