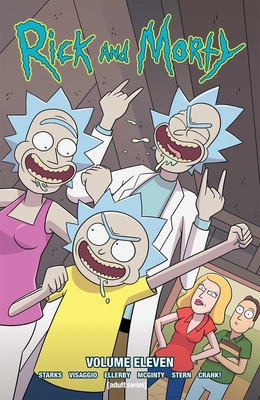 This is book number 11 in the Rick and Morty series.

In this volume, believe it or not, Morty gets...a friend! How is Rick gonna screw THAT up?! Then, Morty crash-lands on a crazy planet, all by himself. Can he stay alive until Rick rescues him? In a special two part story from writer Tini Howard, Jerry joins a pyramid scheme, and everyone pays the price. And in "Honey, I Ricked the Kids," Summer and Morty get Rick-tified. How will they use their new mega-brains? Plus: bonus short stories, including one featuring BRAND NEW Rick and Morty Animated Series character GLOOTIE! Featuring work by Eisner-nominated writer Kyle Starks (Sexcastle) and series artist Marc Ellerby in collaboration with all-star talent like Magdalene Visaggio (Eternity Girl, Morning in America, Kim & Kim), Ian MacGinty (Adventure Time, Rocko's Modern Life), Sarah Stern (Zodiac Starforce), and Crank! Collects issues #51-55.
Marc Ellerby is a comics illustrator living in Essex, UK. He has worked on such titles as Rick and Morty, Doctor Who, Regular Show and The Amazing World of Gumball. His own comics (which you should totally check out!) are Chloe Noonan: Monster Hunter and Ellerbisms. You can read some comics if you like at marcellerby.com.