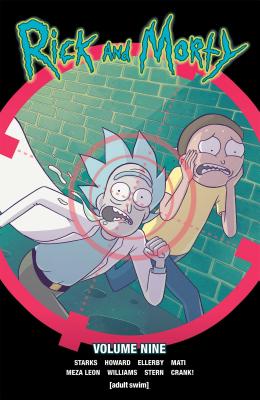 This is book number 9 in the Rick and Morty series.

This volume collects never before seen adventures of degenerate genius scientist Rick Sanchez and his timid grandson Morty Smith, like the very FIRST time they met The Vindicators, and a very special look at the fan-favorite Cronenberg universe. Plus: Rick's made quite a few enemies in his time, so what happens when they team up to seek revenge? And you'll meet Dick and Farty, a degenerate genius scientist and his timid grandson...wait a second...find out more inside!

Featuring work by Eisner-nominated writer Kyle Starks (Sexcastle) and series artist Marc Ellerby in collaboration with all-star talent like Tini Howard (Rick and Morty: Pocket Like You Stole It), Jarrett Williams (Super Pro K.O.!), Rick and Morty animated series artists Sabrina Mati and Juan Meza-Leon, and Sarah Stern (Zodiac Starforce).
Tini Howard is a writer and swamp witch from the Carolina Wilds. Her work includes Magdalena from Image/Top Cow Comics, Rick and Morty™: Pocket Like You Stole It from Oni Press, and Assassinistas from IDW/Black Crown! Her previous work includes Power Rangers: Pink (BOOM! Studios), The Skeptics (Black Mask Studios), and a contribution to the hit Secret Loves of Geek Girls, from Dark Horse Comics. She lives with her husband, Blake, and her son, Orlando, who is a cat.

Jarrett Williams was born in New Orleans, LA and graduated from the Savannah College of Art & Design (MFA). He has three volumes of his pro-wrestling/adventure series Super Pro K.O.! for Oni Press. He has also completed Hyper Force Neo for Z2 Comics. He is currently working on a bunch of original comics but still finds time to play Overwatch. Instagram: https://instagram.com/JarrettWilliams/ Website: http://superproko.squarespace.com/