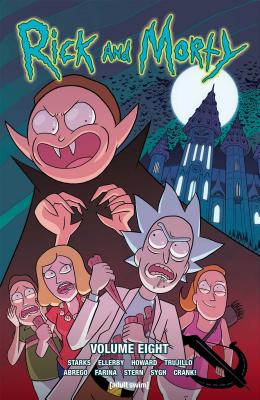 This is book number 8 in the Rick and Morty series.

Catch up on the adventures of degenerate genius scientist Rick Sanchez as he drags his inherently timid grandson Morty Smith on dangerous adventures across the universe! This volume features Eisner-nominated writer Kyle Starks (Sexcastle) and series artist Marc Ellerby in collaboration with all-star talent like Tini Howard (Rick and Morty: Pocket Like You Stole It), Josh Trujillo (Love is Love), Rii Abrego (Adventure Time), and Sarah Stern (Zodiac Starforce).

Witness the sheer depths of sadness in "A Jerry Bad Day"! Glory in the gothic vampire-killing madness of "Let the Rick One In"! See Rick turn into a bunch of different objects (it's not just pickles anymore, bro!) in "Battle Rickale"! All that and more in this collection of Rick and Morty™ comics! Collects issues #36-40.
Tini Howard is a writer and swamp witch from the Carolina Wilds. Her work includes Magdalena from Image/Top Cow Comics, Rick and Morty™: Pocket Like You Stole It from Oni Press, and Assassinistas from IDW/Black Crown! Her previous work includes Power Rangers: Pink (BOOM! Studios), The Skeptics (Black Mask Studios), and a contribution to the hit Secret Loves of Geek Girls, from Dark Horse Comics. She lives with her husband, Blake, and her son, Orlando, who is a cat.

Katy Farina is a comic artist and illustrator based in Los Angeles, CA. She's currently a background painter at Dreamworks TV. In the past, she's done work with Boom! Studios, Oni Press, and Z2 Publishing. In the rare instance she isn't working on comics, she moonlights as the Baba Yaga; enticing local youth into ethical dilemmas and scooting around in her chicken-legged hut.

Sarah Stern is a comic artist and colorist from New York. Find her at sarahstern.com or follow her on twitter at @worstwizard.

Rian Sygh is a freelance comic artist and living enigma working out of Charlotte, NC with his partner and two cats. He's done both illustration and sequential work with Boom! Studios, Diamond, HarperCollins, Oni Press, Valiant, and Z2 Publishing. He is the artist and co-creator of the Prism Award-winning comic The Backstagers. Which is pretty good, honestly.