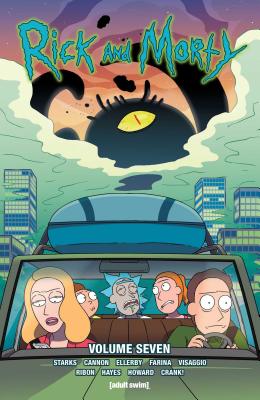 This is book number 7 in the Rick and Morty series.

Catch up on the adventures of degenerate genius scientist Rick Sanchez as he drags his inherently timid grandson Morty Smith on dangerous adventures across the universe! This volume features Eisner-nominated writers Kyle Starks (Sexcastle) and Magdalene Visaggio (Kim & Kim) in collaboration with series artists CJ Cannon and Marc Ellerby, plus guest writers Tini Howard (Rick and Morty™: Pocket Like You Stole It), Pamela Ribon (Moana), and Rick and Morty™storyboard artist Erica Hayes.

Watch as Summer discovers doomed romance! Learn the tragic secrets of Krombopulous Michael! Check out some really cool dinosaurs! All that and more in this collection of Rick and Morty™ comics! Collects issues #31-35.

Pamela Ribon co-created and currently writes the roller derby comic SLAM!, and has penned guest issues of Rick and Morty™. She is also writer of the Oni Press graphic novel My Boyfriend is a Bear. Her screenwriting work includes Moana and Wreck-It Ralph 2: Ralph Breaks the Internet. She's a best-selling author, frequent troublemaker, and true fan of you.

Tini Howard is a writer and swamp witch from the Carolina Wilds. Her work includes Magdalena from Image/Top Cow Comics, Rick and Morty™: Pocket Like You Stole It from Oni Press, and Assassinistas from IDW/Black Crown! Her previous work includes Power Rangers: Pink (BOOM! Studios), The Skeptics (Black Mask Studios), and a contribution to the hit Secret Loves of Geek Girls, from Dark Horse Comics. She lives with her husband, Blake, and her son, Orlando, who is a cat.

CJ Cannon is a self-taught artist living in Nashville, Tennessee. When they're not working on comics, outside riding their bike, or drumming, they're almost always in the house drawing fanart.

Erica Hayes has been working as a professional storyboard artist for four years, and has worked on all three seasons of Rick and Morty™. This is her first professional comic gig, for which she is very excited! Erica lives in LA with her boyfriend, Spencer, and two cats, Marcy and Finn.

Katy Farina is a comic artist and illustrator based in Los Angeles, CA. She's currently a background painter at Dreamworks TV. In the past, she's done work with Boom! Studios, Oni Press, and Z2 Publishing. In the rare instance she isn't working on comics, she moonlights as the Baba Yaga; enticing local youth into ethical dilemmas and scooting around in her chicken-legged hut.