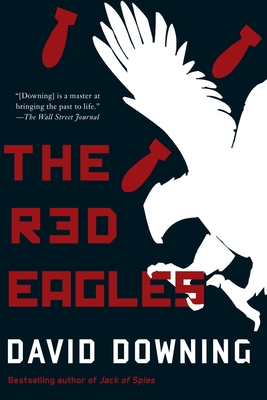 
Email or call for price
World War II is nearly over. For the Russians, the enemy is no longer Nazi Germany, but the American behemoth that threatens to topple the Communist revolution. Deep within the walls of the Kremlin, Stalin’s top man hatches a brilliant plan that will alter the course of postwar history—and it’s all based on a deception as simple as the shell game. Five years later, an atomic bomb detonates deep within the borders of the Soviet Union, stunning the experts who had predicted that Russian science could not produce such a devastating weapon for at least another generation.

The Red Eagles traces the adventures of two spies, Jack Kuznetsky and Amy Brandon, as they track down the most deadly force in the world while hiding their true allegiances and intentions from their compatriots. They are the “red” eagles, sent to America by one of its enemies to steal the greatest secret of all: the key to producing the atomic bomb.

Critically acclaimed spy thriller writer David Downing draws fascinating portrayals of Stalin and Hitler as they determine the fate of the world, drawing us at breakneck speed from the Kremlin to Manhattan and Washington to Cuba and New Zealand.
David Downing grew up in suburban London. He is the author of six books in the John Russell series, Zoo Station, Silesian Station, Stettin Station, Potsdam Station, Lehrter Station, and Masaryk Station, as well as Jack of Spies and One Man’s Flag. He lives with his wife, an American acupuncturist, in Guildford, England.
Praise for The Red Eagles

"All sorts of fresh twists lift this thriller above the pack . . . A richly intricate plot, offbeat characters, and surprising locations should satisfy all but the most jaded thrill-seekers."
—Kirkus Reviews

“A beautifully crafted and compelling thriller with a heart-stopping ending . . . An unforgettable read.”
—Charles Todd, author of the Inspector Ian Rutledge Series

“Downing distinguishes himself by eschewing the easy ways out. He doesn't shy away from portraying the cold brutality of the Third Reich, and his characters are far from stereotypes—they're flawed, confused and real.”
—NPR

“[Downing ] is smart and erudite, with a knack for fully-rounded characters and atmospheric but unfussy prose . . . a ripping good tale.”
—The Seattle Times

"Downing's outstanding evocation of the times (as masterly as that found in Alan Furst's novels or Philip Kerr's Bernie Gunther series), thematic complexity (as rich as that of John le Carré), and the wide assortment of fully rendered characters provide as much or more pleasure than the plot, where disparate threads are tied together in satisfying and unexpected ways."
—Library Journal, Starred Review