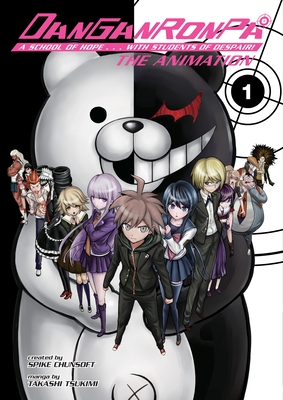 
Usually Ships in 1-5 Days
Each year, the elite Hope's Peak Academy selects only the most gifted and talented students to enroll...plus one ordinary student, chosen by lottery. Makoto Naegi was that lucky person--or so he thought! When he shows up for class, he finds the elite students are a bizarre cast of oddballs under the ruthless authority of a robot teddy bear principal, Monokuma. The bear lays down the school rules: the only way out of Hope's Peak is to not only murder another student...but get away with it, as every murder is followed by a tribunal where the surviving students cross-examine each other!

Inspired by the Danganronpa videogame series and based on the anime of the same name, the Danganropa manga is a quirky, fun, weird, and dynamic take on the high school Battle Royale genre.
Spike Chunsoft is a Japanese video game developer and publisher. The company is the result of a merger between Spike and Chunsoft and is owned by Dwango. The author lives in Tokyo, Japan.