The Case of the Murderous Dr. Cream: The Hunt for a Victorian Era Serial Killer (Hardcover) 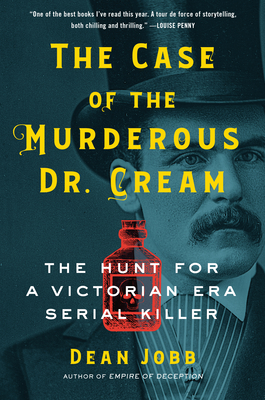 The Case of the Murderous Dr. Cream: The Hunt for a Victorian Era Serial Killer (Hardcover)

”When a doctor does go wrong he is the first of criminals,” Sherlock Holmes observed during one of his most baffling investigations. “He has nerve and he has knowledge.” In the span of fifteen years, Dr. Thomas Neill Cream murdered as many as ten people in the United States, Britain, and Canada, a death toll with almost no precedent. Poison was his weapon of choice. Largely forgotten today, this villain was as brazen as the notorious Jack the Ripper.

Structured around the doctor’s London murder trial in 1892, when he was finally brought to justice, The Case of the Murderous Dr. Cream exposes the blind trust given to medical practitioners, as well as the flawed detection methods, bungled investigations, corrupt officials, and stifling morality of Victorian society that allowed Dr. Cream to prey on vulnerable and desperate women, many of whom had turned to him for medical help.

Dean Jobb transports readers to the late nineteenth century as Scotland Yard traces Dr. Cream’s life through Canada and Chicago and finally to London, where new investigative tools called forensics were just coming into use, even as most police departments still scoffed at using science to solve crimes. But then, most investigators could hardly imagine that serial killers existed—the term was unknown. As the Chicago Tribune wrote, Dr. Cream’s crimes marked the emergence of a new breed of killer: one who operated without motive or remorse, who “murdered simply for the sake of murder.” For fans of Erik Larson’s The Devil in the White City, all things Sherlock Holmes, or the podcast My Favorite Murder, The Case of the Murderous Dr. Cream is an unforgettable true crime story from a master of the genre.
Dean Jobb is an award-winning author and journalist and a professor at the University of King’s College in Halifax, Nova Scotia, where he teaches in the Master of Fine Arts in Creative Nonfiction program. He is the author of eight previous books, including Empire of Deception, which the New York Times Book Review called “intoxicating and impressively researched” and the Chicago Writers Association named the Nonfiction Book of the Year. Jobb has written for major newspapers and magazines, including the Chicago Tribune, Toronto’s Globe and Mail, and the Irish Times. He writes a monthly true-crime column, “Stranger Than Fiction,” for Ellery Queen’s Mystery Magazine. His work as an investigative reporter has been nominated for Canada’s National Newspaper and National Magazine awards, and Jobb is a three-time winner of Atlantic Canada’s top journalism award.

One of the Most Anticipated Books of 2021:
The New York Times Book Review * BuzzFeed * CNN * CrimeReads * Book Riot

“Jobb recounts Cream’s life and evokes the societal attitudes that allowed him to kill: the blind faith placed in doctors, the power imbalance between Cream and the people who sought his care.”
—The New York Times

“A deeply absorbing account of the life and deeds of one of the Ripper’s earliest ‘successors’ . . . An admirable piece of work, a model for its kind.”
—The Wall Street Journal

“[Dr. Thomas Neill Cream] will hauntingly occupy a space in your nightmares after you read of his life and crimes in The Case of the Murderous Dr. Cream. An extraordinarily well-researched and arrestingly written work . . . this is a book that grabs you from its first sentence, weaving a suspenseful tale and taking readers on a grand, if gruesome, historical journey.”
—Chicago Tribune

“If you've been hunting for your next true crime addiction this summer, Dean Jobb's The Case of the Murderous Dr. Cream has it all: a serial-killer doctor, corrupt leaders, and a ground-breaking investigation by Scotland Yard, all within the spellbinding setting of London circa 1892.”
—Elle

“True crime fans will want to pick up Dean Jobb’s engrossing account of Thomas Neill Cream . . . Jobb builds Cream’s world in vivid, transportive detail; I had a lot of fun being swept away.”
—BuzzFeed, “28 Summer Books to Get Excited About”

“A must for true crime fans.”
—CNN

“A tour de force of storytelling. One of the best books I’ve read this year. Dean Jobb breathes new life into Cream's victims—who they were, where and how they lived—all the while blending in thorny issues of policing, of the fictional detectives being created, of the other serial killers on the loose. This book is both chilling and thrilling.”
—Louise Penny, #1 New York Times bestselling author of the Chief Inspector Gamache series

“The Case of the Murderous Dr. Cream is a macabre, utterly suspenseful true crime thriller about a forgotten madman every bit as cunning and evil as Jack the Ripper. Dean Jobb combines scholarship with a breakneck narrative so relentless it kept me up all night. Warning: Read with the lights on.”
—Abbott Kahler, New York Times bestselling author (as Karen Abbott) of The Ghosts of Eden Park

“The story of the infamous poisoner Thomas Neill Cream is so many things—horrifying, fascinating, and insightful, a portrait of late 19th-century police work at a time when the idea of the professional detective was just starting to take shape. And in this vivid and compelling book, Dean Jobb does full justice to that story.”
—Deborah Blum, New York Times bestselling author of The Poisoner’s Handbook

“Masterful . . . True crime doesn’t get any better than this.”
—Booklist

“Chilling and fascinating . . . Jobb’s true crime stories are not to be missed.”
—CrimeReads

“Jobb’s extensive research pays off in a true crime masterpiece that will easily sit alongside The Devil in the White City.”
—Publishers Weekly, starred review

“An illuminating, if frightening, book . . . Jobb handles this hideous yet compelling story so well . . . An absorbing and grim account, The Case of the Murderous Dr. Cream is a gripping addition to the true crime genre.”
—Bookreporter.com

“Jobb uses Cream’s spree to illuminate the era’s surgical and policing practices, and despite Cream’s monstrousness, Jobb’s storytelling ‘makes the book a pleasure to read.’”
—The Week

“Jobb does a masterful job of following the investigation, which ranged from England to the United States to Canada, and of presenting Dr. Cream not merely as a murderer, but as a complex, unstable, and deeply fascinating individual. True crime doesn’t get any better than this.”
—Booklist

“Jobb’s research is excellent . . . [His] compelling account of Cream’s reign of terror will appeal to readers interested in Jack the Ripper or Peter Sutcliffe, the Yorkshire Ripper.”
—Library Journal

“Jobb captures the hypocrisy, class differences, and gender inequality of the times in an extensively researched non-fiction telling of the forgotten nineteenth century serial killer Dr. Thomas Neill Cream . . . Both grim and hard to put down.”
—Southern Bookseller Review

“Dean Jobb’s meticulous research is evident on every page of his gripping study of the extraordinary serial killer Doctor Cream, a nineteenth century ‘monster of iniquity’ whose homicidal career was truly stranger than fiction.”
—Martin Edwards, author of Mortmain Hall and the Lake District Mysteries

“Dean Jobb has produced another mesmerizing feat of historical storytelling. The Case of the Murderous Dr. Cream vividly recreates the career of one of the most audacious—and deadly—criminals in history.”
—Gary Krist, New York Times bestselling author of Empire of Sin and The Mirage Factory

“Tense, atmospheric, and effortlessly readable, The Case of the Murderous Dr. Cream has all the sinister elegance of a hansom cab emerging from a late Victorian London smog.”
—Paul Willetts, author of King Con

“Deeply researched and rich in grisly detail, The Case of the Murderous Dr. Cream fuses the blow-by-blow efforts to catch a serial killer with the larger picture of crime and detection in the late nineteenth century. A fine piece of social history as well as an extraordinary story, it engrossed me right up to its deeply satisfying conclusion.”
—Charlotte Gray, author of eleven nonfiction bestsellers, including The Massey Murder and Murdered Midas

“A brilliant evocation of an age and a fascinating dissection of a serial killer's crimes. Dean Jobb is a first-rate storyteller and historical detective. A real page-turner.”
—Lindsey Fitzharris, author of The Butchering Art: Joseph Lister's Quest to Transform the Grisly World of Victorian Medicine

“Corruption, madness, murder: Dr. Cream has it all. This is a spectacular and absorbing tale, meticulously reported and vividly told. An enthralling page-turner.”
—Jonathan Eig, author of Get Capone: The Secret Plot that Captured America’s Most Wanted Gangster

“The definitive retelling of a story about a devious doctor, the dogged investigators who hunted him, and the murders that shocked the world. Dr. Cream’s story comes to life in Jobb’s spellbinding tale."
—Kate Winkler Dawson, author American Sherlock: Murder, Forensics, and the Birth of American CSI

“A tour de force of research, The Case of the Murderous Dr. Cream conjures an era when poisoners roamed the earth—and police seemed powerless to stop them.”
—Margalit Fox, author of Conan Doyle for the Defense

“An exciting whodunit  . . . Jobb also does the unusual in true crime: he describes in detail the lives of Cream’s victims. The scholarship he employed to tell this story is staggering . . . the numbing regard and treatment of women in Victorian times — especially of unmarried pregnant, widowed and abandoned women — tugs at the heart.”
—Winnipeg Free Press

“A must-read... historically rich and shockingly poignant, Jobb’s text is not one to miss.”
—True Crime Index

“First-rate creative non-fiction [and] very hard to put down . . . Crime buffs are going to motor through this book.”
—Saltwire.com