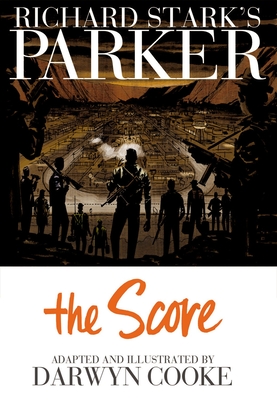 This is book number 3 in the Parker series.

A high-octane trip across America, The Score finds Parker assembling the best caper men he can find to knock over his most audacious target yet: an entire town. They scheme, they prepare, and they execute with military precision, unaware that the whole thing is about to blow up in their faces. Long considered a high water mark in the Parker series, this new graphic adaptation brings the original to violent, double-crossing life.

Darwyn Cooke, Eisner-Award winning creator of DC: The New Frontier, continues adapting Richard Stark's genre-defining Parker novels with his signature pulp flair in this third installment. A hard-nosed thief, Parker is Richard Stark's most famous creation, and Stark, in turn, is the most famous pen name of Mystery Writers of America Grand Master Donald E. Westlake.
Richard Stark is the most famous pseudonym of world-renowned author Donald Westlake (1933-2008). In 1962 hecreated the master thief Parker and began a series of novels that have been recognized as seminal works of crime fiction. Several of Westlake’s books have been adapted by Hollywood and Westlake’s adaptation of The Grifters earned him an Academy Award nomination for best motion picture screenplay. Westlake has won numerous awards for his fiction and in 1993 the Mystery Writers of America named him a Grand Master, the highest honor bestowed by that prestigious society.

"The Score succeeds on every front: as a solid period piece, as an excellent adaptation of a fantastic book, and as a solid graphic experience of the 60s through the lens of a quiet, unyielding thief with nothing to lose." –PopMatters.com