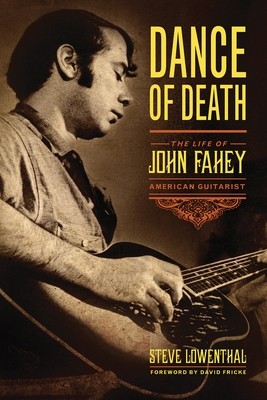 
Email or call for price
John Fahey hovers ghostlike in the sound of almost every acoustic guitarist who came after him, from Leo Kottke to Jimmy Page. In essence, John Fahey is to the solo acoustic guitar what Jimi Hendrix was to the electric: the man whom all subsequent musicians had to listen to.

Fahey made more than forty albums between 1959 and his death in 2001, most of them featuring only his solo steel-string guitar. He fused elements of folk, blues, and experimental composition, taking familiar American sounds and recontextualizing them as something entirely new. His artistic voice transformed the cultural landscape of his time—and ours.

Yet despite his stature as a groundbreaking visionary, Fahey's intentions—as a man and as an artist—remain largely unexamined. His memoir, How Bluegrass Music Destroyed My Life, was largely fiction; his liner notes were full of half-truths. John Fahey's real story has never been told—until now.

Journalist Steve Lowenthal has spent years researching Fahey's life and music, talking with his producers, his friends, his peers, his wives, his business partners, and many others. He describes how Fahey introduced prewar blues records and the men who made them to a broader public; how his independent label Takoma set new standards; how he battled his demons, including stage fright, alcohol, and prescription pills; how he ended up homeless and mentally unbalanced; and how, despite his troubles, he managed to found a new record label, Revenant, that won Grammys and remains critically revered.

This portrait of a troubled and troubling man in a constant state of creative flux is the compelling story of a great American outcast.
Steve Lowenthal is a longtime music writer whose work has been published in Spin, the Village Voice, and many other publications, including his own magazine Swingset. He runs the VDSQ record label dedicated to current instrumental guitar music and manages the label Black Editions. He lives in Los Angeles. David Fricke is a senior editor at Rolling Stone magazine.
"Offer[s] a sympathetic portrait of a troubled yet undeniably talented man." —Booklist

"Dance of Death benefits from astute research and interviews with friends, contemporaries, fellow musicians, and family, painting a vivid picture of a remarkable man." —Under the Radar

"If you have any love for the sound of a guitar and haven't heard him, hustle to your music source and get "The Best of John Fahey" to listen to while reading Lowenthal's book. You won't be disappointed." —Milwaukee Journal-Sentinel

"The fate of the markedly talented and decidedly peculiar, even misanthropic Fahey is told engagingly and with insight by Steve Lowenthal in a compact but potent new biography, Dance of Death: The Life of John Fahey, American Guitarist." —NewRepublic.com