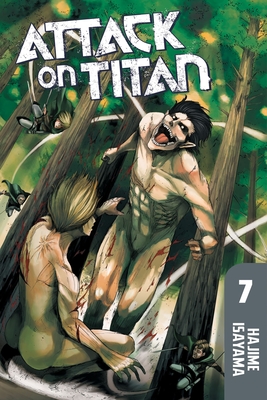 This is book number 7 in the Attack on Titan series.

TURNING ON THEIR OWN

The Survey Corps sets a cunning trap to capture the mysterious Abnormal Titan that broke through their ranks. As Armin tries to determine the grotesque creature’s identity and purpose, scouts report Titans closing in on all sides! But they don’t seem to be after the humans – instead they’re targeting the Titan!
Hajime Isayama first published Attack on Titan in Bessatsu Shōnen Magazine in 2009. It became a sleeper hit and won the Kodansha Manga Award in shōnen category in 2011. This is his first manga.