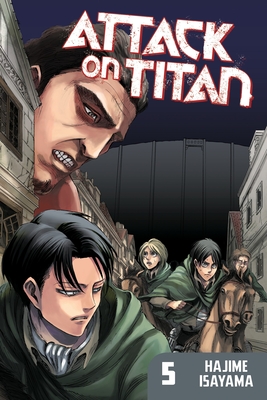 This is book number 5 in the Attack on Titan series.

CAN YOU GO HOME AGAIN?

Thanks to Eren, humanity has taken the town of Trost back from the Titans. Exhausted, Eren falls into a coma for three days – and wakes in shackles, staring at Erwin Smith, leader of the Survey Corps. Certain that Eren’s father’s research holds the key to the mystery of the Titans’ rise, Smith wants an expedition to retrieve it from the house where Eren grew up. But that’s deep in Titan territory, and to get there Eren will need to master a power he still doesn’t fully understand…

The megahit Attack on Titan anime finally returns, streaming on April 1!
Hajime Isayama first published Attack on Titan in Bessatsu Shōnen Magazine in 2009. It became a sleeper hit and won the Kodansha Manga Award in shōnen category in 2011. This is his first manga.