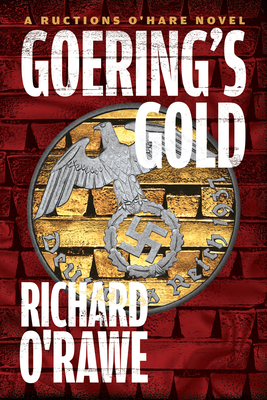 "Mr. O’Rawe ... has written the most riotous caper novel since his own 'Northern Heist,' and with luck, there will be more adventures ahead. "—Tom Nolan, The Wall Street Journal

Ructions O'Hare returns in a thriller — based on one of history's greatest unsolved heists — pitting him against the IRA, Interpol, and neo-Nazis . . .

When WWII ended, the allies discovered that a huge amount of gold bullion plundered by Nazi Reichsmarschall Hermann Goering had gone missing. Some believed the gold had been hidden in a train box car in Poland. Others that it was secreted in Lake Toplitz in the Austrian Alps. And a few thought it was buried in the Republic of Ireland, which was neutral during the war.

When ex-IRA soldier Ructions O'Hare stumbles on a piece of Nazi memorabilia once owned by Goering, he begins to think that those who suspect the gold was in Ireland just might be on to something.

But for Ructions to return to Ireland is easier said than done. For a start, the IRA is after him for not paying them a cut from a huge bank robbery he carried out in Belfast. And then there's the Neo-Nazis, who believe that Goering's gold rightfully belongs to them, and who are happy to kill anyone who gets in their way.

And as Ructions gathers clues to the gold's location and, as his many adversaries realize he's getting closer, it's as if a noose is tightening around his neck...
Richard O’Rawe is a former IRA operative who was imprisoned for bank robbery in the Long Kesh penitentiary during the 1981 hunger strike by prisoners, which resulted in the death of ten prisoners. O’Rawe was the IRA’s press officer for the prisoners. He would later go on to write a bestselling book about the experience, Blanketmen: An Untold Story of the H-Block Hunger Strike, as well as several other books inspired by his experiences in the IRA, including Afterlives: The Hunger Strike and the Secret Offer that Changed Irish History, and In the Name of the Son: The Gerry Conlon Story. Most recently, he is the author of the IRA-themed thriller, Northern Heist. He lives in Belfast.
"I clamor for the next installment of Richard O’Rawe’s rollicking series of heist novels featuring James 'Ructions' O’Hare . . . O’Rawe adopts a pitch of dark humor that is at times brutal, often arch, but hardly ever bitter. The pace crackles as it moves from Belfast to Paris to other European climes, and it’s nearly an impossibility not to root for Ructions, rogue that he is." — Sarah Weinman, The New York Times Book Review

"Mr. O’Rawe ... has written the most riotous caper novel since his own “Northern Heist,” and with luck, there will be more adventures ahead." Tom Nolan, The Wall Street Journal

“Full of double- and triple-crosses… Northern Heist’s deeds and details seem as real as a smashed kneecap, while its stopwatch tension, heightened by present-tense voice, is reminiscent of such classic caper films as ’Rififi’ and ’The Asphalt Jungle’.” —Tom Nolan, The Wall Street Journal

“Gripping … A hugely impressive and skillfully crafted debut novel … Its dialogue is sharp and venomous … O’Rawe’s confidence as a storyteller takes off as the heist begins, dropping you in all kinds of damned places.”  — The Irish times

“O’Rawe channels both Elmore Leonard and Guy Ritchie in this heist thriller full of sharp twists and gritty dialogue, emerging with a style all his own. His reimagining of the real-life bank heist feels so authentic readers will hope he has a strong alibi.” — Publishers Weekly starred review

“As authentic as a jar of Guinness and as real as an exit wound. A fast-paced, uppercut of a novel.” — Reed Farrel Coleman, New York Times bestselling author of Where It Hurts