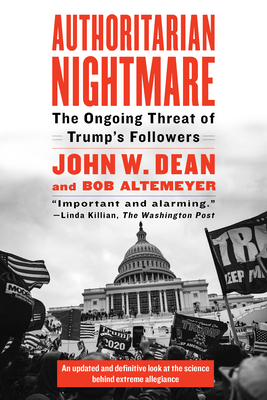 
Usually Ships in 1-5 Days
Donald Trump may be gone from the White House, but the 75 million people who voted for him are still out there . . .

Updated to reflect election results, this is a look at the entirety of the Trump phenomenon, using psychological and social science studies, as well as polling analyses, to understand Donald Trump's followers, and what they will do now that he's gone.

To find out, John Dean, of Watergate fame, joined with Bob Altemeyer, a professor of psychology with a unique area of expertise: Authoritarianism.

Relying on social science findings and psychological diagnostic tools (such as the "Power Mad Scale" and the "Con Man Scale"), and including exclusive research and analysis from the Monmouth University Polling Institute (one of America's most respected public opinion research foundations), the authors provide us with an eye-opening understanding of the Trump phenomenon — and how it may not go away, whatever becomes of Trump.
JOHN W. DEAN served as White House counsel for President Richard Nixon from 1970 to 1973. During the Watergate scandal, his Congressional testimony helped lead to Nixon's resignation. Dean has written about Watergate in his New York Times bestsellers Blind Ambition and The Nixon Defense: What He Knew and When He Knew It. Among his other books are the national bestsellers Worse Than Watergate and Conservatives Without Conscience. He is a regular political and legal commentator on CNN.

BOB ALTEMEYER's research on the psychological makeup of authoritarian leaders and followers, and his development of the "RWA" (right-wing authoritarian) test, has established him as the recognized expert in the field. He is the author of The Authoritarians and Enemies of Freedom: Understanding Right-Wing Authoritarianism. Altemeyer taught psychology at the University of Manitoba and was awarded the American Association for the Advancement of Science Prize for Behavioral Science
Research.