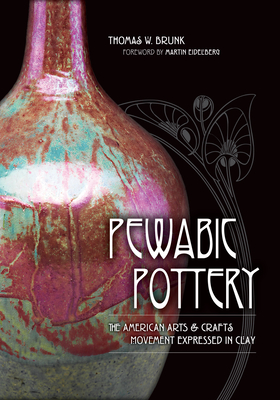 
Usually Ships in 1-5 Days
Pewabic Pottery is a significant manifestation of the international Arts and Crafts movement in Michigan. As ceramic expert Martin Eidelberg points out in his introductory essay, it was also a striking example of the coterie of talented American female ceramists who broke with traditional norms, seeking to excel both as artists and as entrepreneurs. Founded by Mary Chase Perry and Horace James Caulkins in Detroit at the turn of the twentieth century, Pewabic produced simple objects with unique glazes rooted in ceramic history, yet freshly made their own. This chronological history of Pewabic work—the most extensive study published to date—focuses primarily on the pottery as operated by Perry and Caulkins, and then goes up through the beginning of the Pewabic Society Inc. in 1979. It offers a fascinating, in-depth exploration of the various aspects of the history of Pewabic Pottery, from the personal lives of its founders and prominent potters to discussions of tiles and glazes and finally to Pewabic Pottery’s place at Michigan State University. Authored by the most recognized scholar on Pewabic Pottery, this study relies heavily on archival sources to achieve a comprehensive history of one of Michigan’s most interesting art studios.
THOMAS W. BRUNK (1949–2018) was curator and archivist of Michigan State University’s Pewabic Pottery from 1974 to 1981 and cofounder of the Pewabic Society Inc. in 1979, serving as its president in 1988–1989. He was considered Detroit’s foremost chronicler of subjects such as Pewabic Pottery, the Scarab Club, and the Masonic Temple, among others.