The Golden Lane: How Missouri Women Gained the Vote and Changed History (Paperback) 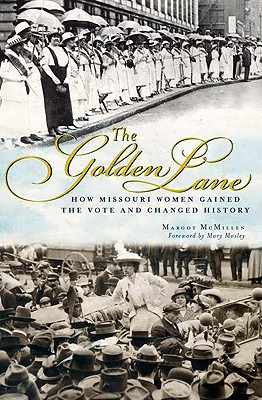 The Golden Lane: How Missouri Women Gained the Vote and Changed History (Paperback)


Email or call for price
It was June 14, 1916, a warm, sticky Wednesday morning. The Democratic Convention would soon meet in St. Louis. Inside the Jefferson Hotel, the men ate breakfast and met with their committees. Outside the hotel, thousands of women quietly took their places along both sides of Locust Street. They stood shoulder to shoulder, each one in a dress that brushed the pavement, shading herself with a yellow parasol and wearing a yellow sash that said Votes for Women."? The all-male delegations may not have had a comfortable walk down the Golden Lane, but they were moved to add women's suffrage to the national platform. Join Margot McMillen for an accessible history of a privilege too often taken for granted.