They Don't Want Her There: Fighting Sexual and Racial Harassment in the American University (Paperback) 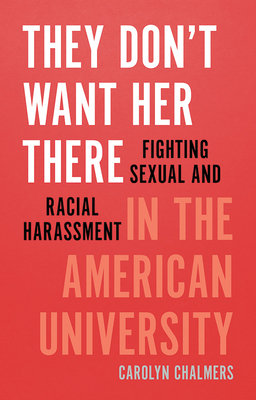 They Don't Want Her There: Fighting Sexual and Racial Harassment in the American University (Paperback)


Usually Ships in 1-5 Days
Before the nation learned about workplace sexual harassment from Anita Hill, and decades before the #MeToo movement, Chinese American professor Jean Jew M.D. brought a lawsuit against the University of Iowa, alleging a sexually hostile work environment within the university’s College of Medicine.

As Jew gained accolades and advanced through the ranks at Iowa, she was met with increasingly vicious attacks on her character by her white male colleagues—implying that her sexuality had opened doors for her. After years of being subjected to demoralizing sexual, racial, and ethnic discrimination, finding herself without any higher-up departmental support, and noting her professional progression beginning to suffer by the hands of hate, Jean Jew decided to fight back. Carolyn Chalmers was her lawyer.

This book tells the inside story of pioneering litigation unfolding during the eight years of a university investigation, a watershed federal trial, and a state court jury trial. In the face of a university determined to defeat them and maintain the status quo, Jew and Chalmers forged an exceptional relationship between a lawyer and a client, each at the top of their game and part of the first generation of women in their fields. They Don’t Want Her There is a brilliant, original work of legal history that is deeply personal and shows today’s professional women just how recently some of our rights have been won—and at what cost.

Carolyn Chalmers’s career as an employment litigator, law firm partner, and mediator spans four decades and scores of cases of sex discrimination in American universities. She lives in Minneapolis, Minnesota.
“They Don’t Want Her There is a powerful and infuriating story of sexual harassment in a prominent medical school leading to a series of riveting courtroom dramas. Chalmers leads us through the courtroom challenges of sexual harassment at a time when there was very little legal precedent to draw upon. Her own story, as a young, deeply committed feminist lawyer, broadens the human dimension of this storied and exhilarating work.”—Sara M. Evans, author, Tidal Wave: How Women Changed America at Century’s End

“A critically important window into law, lawyering, and rights consciousness in the early years of legal recognition of sexual harassment. The state of the law alone makes this an important account, but it is the relationship—two professional women, medical scientist and lawyer, collaborating in pursuit of justice—that makes this account essential reading for all who care about justice today.”—Barbara Young Welke, author, Law and the Borders of Belonging in the Long Nineteenth Century United States

“You don’t need to be an activist lawyer or familiar with maddening academic infighting to be captured by Carolyn Chalmers’s compelling narrative about Jean Jew’s righteous battle with her colleagues and university. This is a must-read to learn about a pivotal workplace sexual harassment case.”—Jay Weiner, author, Professor Berman: The Last Lecture of Minnesota’s Greatest Public Historian