Florentine Codex: Book 3: Book 3: The Origin of the Gods (Paperback) 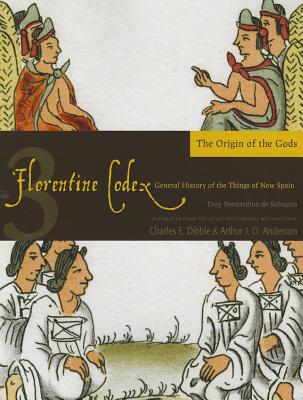 Florentine Codex: Book 3: Book 3: The Origin of the Gods (Paperback)

Two of the world’s leading scholars of the Aztec language and culture have translated Sahagún’s monumental and encyclopedic study of native life in Mexico at the time of the Spanish Conquest. This immense undertaking is the first complete translation into any language of Sahagún’s Nahuatl text, and represents one of the most distinguished contributions in the fields of anthropology, ethnography, and linguistics.

Written between 1540 and 1585, the Florentine Codex (so named because the manuscript has been part of the Laurentian Library’s collections since at least 1791) is the most authoritative statement we have of the Aztecs’ lifeways and traditions—a rich and intimate yet panoramic view of a doomed people.

The Florentine Codex is divided by subject area into twelve books and includes over 2,000 illustrations drawn by Nahua artists in the sixteenth century.

Book Three describes in detail the excitingand sometimes bloody—origin stories of Uitzilopochtli, Titlacauan, and Quetzalcoatl. The appendix discusses other significant religious aspects of the Aztec religion, such as how boys are raised to be high priests and what happens to Aztecs after death.

Arthur J. O. Anderson (1907-1996) was an anthropologist specializing in Aztec culture and language. He received his MA from Claremont College and his PhD in anthropology from the University of Southern California. He was a curator of history and director of publications at the Museum of New Mexico in Santa Fe and taught at a number of institutions, including San Diego State University, from which he retired.

Charles E. Dibble (1909-2002) was an anthropologist, linguist, and scholar specializing in Mesoamerican cultures. He received his master’s and doctorate degrees from the Universidad Nacional Autónomo de México and taught at the University of Utah from 1939-1978, where he became a Distinguished Professor of Anthropology.

For their work on the Florentine Codex, both Dibble and Anderson received the Mexican Order of the Aztec Eagle, the highest honor of the Mexican government; from the King of Spain the received the Order of Isabella the Catholic (Orden de Isabel la Católica) and the title of Commander (Comendador).

“Highly recommended for all academic and large public libraries.”—Choice

“Bringing the knowledge of modern scholarship to bear on their materials, the translators have been able to illuminate many obscurities in the text. The complete series of volumes is a landmark of scholarly achievement.”—The New Mexican

“This publication of Sahagún makes available to scholars and their students alike the original Nahuatl text for comparison with the more easily accessible Spanish text, which is in many places merely an abridgment or précis of the original. A whole series of native sources for the study of Mexican pre-conquest history is now at hand for a field of historical study formerly restricted to a small number of investigators. A whole chapter of the cultural history of early Colonial Mexico is unfolding before us. [The Codex is] an impressive monument to Spanish humanism in the sixteenth-century New World.”—The Hispanic American Historical Review

“Sahagún emerges as the indisputable founder of ethnographic science. The accomplishments of the joint translators, Dibble and Anderson, will surely rank among the greatest achievements of American ethnohistorical scholarship.”—Natural History