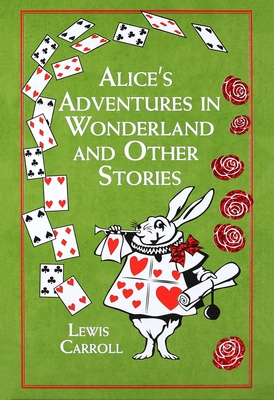 
Usually Ships in 1-5 Days
Scurry down the rabbit hole and step through the looking glass with this luxurious compilation of works from Lewis Carroll.  Don’t be late--it’s a very important date!

Witty, whimsical, and often nonsensical, the fiction of Lewis Carroll has been popular with both children and adults for over 150 years. Canterbury Classics's Alice's Adventures in Wonderland takes readers on a trip down the rabbit hole in Alice’s Adventures in Wonderland, where height is dynamic, animals talk, and the best solutions to drying off are a dry lecture on William the Conqueror and a Caucus Race in which everyone runs in circles and there is no clear winner. Through the Looking Glass begins the adventure anew when Alice steps through a mirror into another magical world where she can instantly be made queen if she can only get to the other side of the colossal chessboard.Complete with the original drawings by John Tenniel, this luxurious leather-bound edition is a steal for new readers and Carroll fans alike.
Charles Lutwidge Dodgson (27 January 1832 – 14 January 1898), better known by the pseudonym Lewis Carroll, was an English author, mathematician, logician, Anglican deacon, and a photographer. His most famous writings are Alice's Adventures in Wonderland and its sequel Through the Looking-Glass, as well as the poems "The Hunting of the Snark" and "Jabberwocky," all examples of the genre of literary nonsense. He is noted for his facility at word play, logic, and fantasy.

Sir John Tenniel (1820–1914) was a British illustrator, graphic humourist and political cartoonist whose work was prominent during the second half of England’s 19th century. Tenniel is considered important to the study of that period’s social, literary, and art histories. He was knighted by Queen Victoria for his artistic achievements in 1893.

Tenniel is most noted for two major accomplishments: he was the principal political cartoonist for England’s Punch magazine for over 50 years, and he was the artist who illustrated Lewis Carroll’s Alice’s Adventures in Wonderland and Through the Looking-Glass.