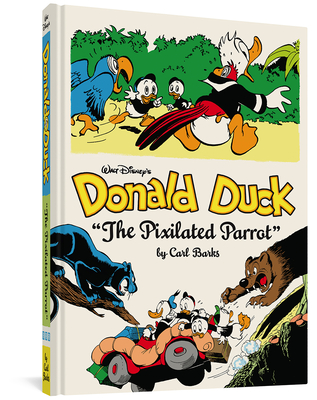 This is book number 9 in the The Complete Carl Barks Disney Library series.

In this collection of short comics by the world-renowned Carl Barks, Donald, Uncle Scrooge, and the nephews go on a wild parrot chase, among other adventures.

Carl Barks delivers another superb collection of clever plot twists, laugh-out-loud comedy, and all-around cartooning brilliance. Donald gives Uncle Scrooge a parrot for his birthday but the feathered troublemaker escapes with the combination to Scrooge’s safe holding “ninety tons of money.” Hijinks ensue as Donald and his nephews set off on an unexpected adventure to recover the lovesick bird. Then, Donald and the boys are shanghaied by a mysterious stranger, who whisks them off to face perils in the desert in “Ancient Persia,” where they uncover a lost city—and its reconstituted inhabitants! And Barks cuts loose from his regular panel designs to deliver one of his finest stories, “Vacation Time” (it has its own Wikipedia page), as Donald displays unusual depths of courage and heroism when he has to rescue Huey, Dewey, and Louie on a wilderness outing gone wrong.

Carl Barks... was probably the best artist and writer working in the entire field of comics. ... Ingenious, clever, and funny, the Barks Duck Books... are as readable and immediate to me as an adult as they were when I first discovered them as a child.
— Jeff Smith (Bone, RASL) - Mental Floss

At this point, we're a couple years into the fantastic reprints of Duck stories by Carl Barks from Fantagraphics, so you should already know that they're some of the best comics ever printed. That's a given, right? Right. ...[T]he stories are still masterfully told and very, very funny.
— Chris Sims - ComicsAlliance

It’s Carl Barks -- pound for pound the single greatest and most influential writer in the entire history of comics.
— Alexander Lucard - Inside Pulse