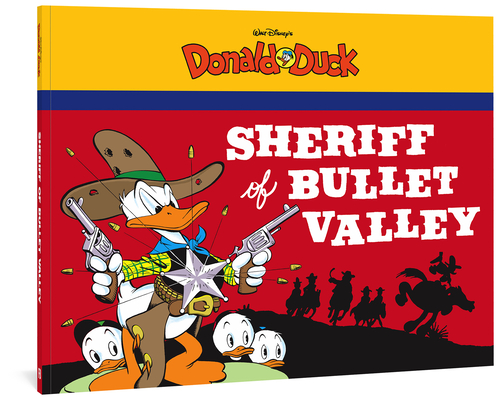 When a passel of extra-sneaky, extra-ornery high-tech cattle rustlers strikes, Donald Duck bravely dons a badge to become the “Sheriff of Bullet Valley.” Fortified by the know-how he’s gained watching Hollywood Westerns, our ever-intrepid Duck sets out to solve the perplexing mystery of how Blacksnake McSquirt’s brand keeps showing up on the cattle of the honest ranchers. Sheriff of Bullet Valley is the second entry in our new line of affordable kid-friendly Donald Duck books: just-right, half-height books packed with fun, laughs, and adventure. Each story is complete with all the original artwork (no panels have been dropped or altered). Bonus: Donald’s always-exasperating cousin Gladstone Gander returns in, um, “Gladstone Returns.” All stories written and drawn by Disney legend Carl Barks!