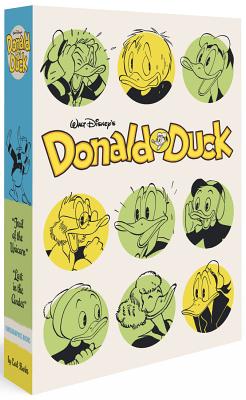 A double dose of Donald Duck! Walt Disney’s Donald Duck: “Lost in the Andes” and Walt Disney’s Donald Duck: “Trail of the Unicorn” make up this special boxed set of two of our most popular Donald Duck albums exquisitely representing the Duck stories of Carl Barks, one of the most brilliant cartoonists of the 20th century. The title story of Lost in the Andes features the Ducks’ memorable quest to South America in search of rare “square eggs” and Trail of the Unicorn’s title tale is a trek to the Himalayas to find that fabled mythical creature. Handsomely presented in a stunningly beautiful and colorful box set at a special price that even Uncle Scrooge would approve.

I recall reading some of those Donald Duck comics in my youth, never understanding that they stood head and shoulders over anything else available at the time — or since. ... You can’t get the masterpieces for a dime anymore but they are available [in] Walt Disney’s Donald Duck Box Set: Lost in the Andes and Trail of the Unicorn...