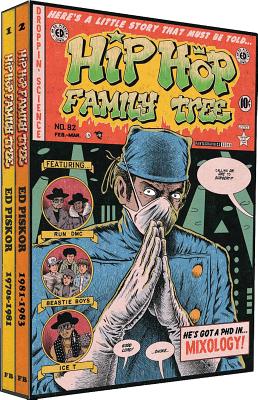 A special slipcover and a special comic are included in the smash hit’s gift set.

To celebrate the resounding critical and commercial success of the first two volumes of Ed Piskor’s unprecedented history of Hip Hop, we are offering the two books, volumes 1 and 2 of the series, in a mind-blowingly colorful slipcase, drawn and designed by the artist. As if that’s not enough, in addition to the two books and the slipcase itself, Piskor has drawn a 24-page comic book — Hip Hop Family Tree #300 — specifically for this boxed set that elegantly reflects the confluence of hip hop and comics, which was never more apparent in the early 1990s than with the famous Spike Lee-directed Levi Jeans commercial starring Rob Liefeld, who went on to create Youngblood and co-found Image Comics, not to mention ending up on the radar of gangster rapper Eazy E. Piskor tells this story as a perfect parody/pastiche/homage to ’90s Image comics.


Captures the personalities, imagery and milestones with a hilarity and efficiency that no other medium could.
— Billboard

Ed Piskor’s Hip Hop Family Tree is nothing short of rigorous. The cartoonist streamlines a tangle of facts and figures into a cohesive history of America’s most subversive art form. The project showcases the power and versatility of the medium…

An avid lover of hip-hop music and superhero comic books from a young age, Ed Piskor has combined his two passions to create a remarkable reading experience... Hip Hop Family Tree imagines real-world events through the filter of 1980s Marvel Comics, bringing hip-hop visionaries to the page in a style that exaggerates their energy and style to capture the intensity of the music without having the beats.

…[P]henomenal … Piskor is constantly exploring fresh ways to capture the intensity of the music and the hip-hop scene in his artwork. His storytelling is evolving as the world of his narrative gets better, and the wild growth of the hip-hop industry in the mid-’80s suggests that Piskor’s best is yet to come.
— Oliver Sava - The A.V. Club

One of the defining histories of hip hop… Ed created a portal into the beginning of hip hop, and just saying that a picture is worth a thousand words is a poor way of explaining why its impact is greater than that of a detailed book.
— Daniel Genis - The Daily Beast

The amount of research and history Piskor packs into this book is mind boggling.

These stories are carefully researched and detailed along with great comic book style art...

An astonishing feat of cultural archaeology, in both ambition and
execution. The project somehow doesn’t seem quite real: a comic-book
history of hip-hop going back to the very beginning — the late 70s —
where lore is thick and documentation scarce. To tell this story in any
language would be a challenge; to tell it in the language of comics
feels like a magical summoning.
— Lary Wallace - Vice

This is the comic of all time.

Being in an Ed Piskor comic is cool enough to freeze hot water.

The closest thing to time travel that you’ll be able to give this year is this boxed set featuring the first two volumes of cartoonist Ed Piskor’s Hip Hop Family Tree tomes from Fantagraphics. Packaged with an exclusive 24-page book that explores the connection between hip hop and comics culture, these volumes chronicle how rap music rose from the underground to the mainstream between 1975 and 1983.

If you love hip-hop and comic books, you’re likely already following Ed Piskor’s series Hip Hop Family Tree over at Boing Boing. Still, even if you are a loyal reader with an intimate familiarity with classic rap culture, the new box set from Fantagraphics Books is well worth the price of admission. Gathering together Ed’s first two collected volumes, covering the events of 1975 through 1983, along with a bonus 24-page comic created exclusively for this set, it’s the perfect marriage of retro art, old school hip-hop and good, ol’ fashioned research.

Whether you were there when it was happening or not, this is a book which will unfold a rich universe of music history and all the knock-on effects of it too. With the warmth and immediacy only a true fan could impart, Piskor tells the ongoing history of Hip Hop in these lovingly crafted volumes.
— Sonia Harris - Comic Book Resources

The most compulsively readable book of the year, the series gets better and better as its core cast of characters gets fully established and we get a bit more in-depth with them. ... Piskor’s style and design choices push the quality of this history of hip-hop over the top.
— Rob Clough - The Comics Journal

[A] rapid-fire telling of the early days of rap and hip hop culture… There’s a lot to learn even if you think you’ve heard it all.
— Gene Ambaum - Unshelved