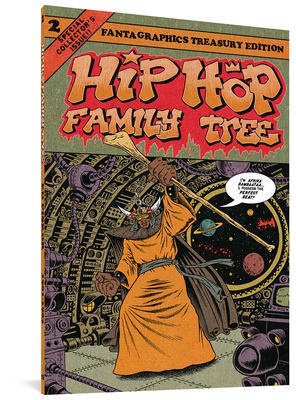 Covering the early years of 1981-1983, Hip Hop has made a big transition from the parks and rec rooms to downtown clubs and vinyl records. The performers make moves to separate themselves from the paying customers by dressing more and more flamboyant until a young group called RUN-DMC comes on the scene to take things back to the streets. This volume covers hits like Afrika Bambaataa’s Planet Rock, Grandmaster Flash and the Furious Five’s the Message, the movie Wild Style and introduces superstars like NWA, The Beastie Boys, Doug E Fresh, KRS One, ICE T, and early Public Enemy. Cameos by Dolemite, LL Cool J, Notorious BIG, and New Kids on the Block (?!)!

Captures the personalities, imagery and milestones with a hilarity and efficiency that no other medium could.
— Billboard

precisely the sturdy vehicle to carry it as far as Piskor will take it.
— Ray Olson - Booklist

An avid lover of hip-hop music and superhero comic books from a young age, Ed Piskor has combined his two passions to create a remarkable reading experience ... Hip Hop Family Tree imagines real-world events through the filter of 1980s Marvel Comics, bringing hip-hop visionaries to the page in a style that exaggerates their energy and style to capture the intensity of the music without having the beats.

…[P]henomenal … Piskor is constantly exploring fresh ways to capture the intensity of the music and the hip-hop scene in his artwork. His storytelling is evolving as the world of his narrative gets better, and the wild growth of the hip-hop industry in the mid-’80s suggests that Piskor’s best is yet to come.
— Oliver Sava - The A.V. Club

One of the defining histories of hip hop… Ed created a portal into the beginning of hip hop, and just saying that a picture is worth a thousand words is a poor way of explaining why its impact is greater than that of a detailed book.
— Daniel Genis - The Daily Beast

The amount of research and history Piskor packs into this book is mind boggling.

...[T]his second stunning volume of Piskor’s witty and thorough history of music, culture and commerce is a blast to read. His depiction of the birth of the movement, its musicians, visual artists, executives and other hustlers crackles with energy. On paper, the printing and production add an appropriately authentic ’80s appearance and vibe to it, enhancing the fun and flavor.
— Richard Pachter - The Miami Herald

These stories are carefully researched and detailed along with great comic book style art...

Piskor had not been born when his new volume begins, but perhaps it’s just as well: Like a reporter with art pen in hand — and a hip-hop soundtrack in his head — the Pittsburgh cartoonist drops bold lines while steeped in deep research, bringing both a fan’s passion and a journalist’s discerning eye to this nitty-gritty history of the art form.
— Michael Cavna - The Washington Post

An astonishing feat of cultural archaeology, in both ambition and execution. The project somehow doesn’t seem quite real: a comic-book history of hip-hop going back to the very beginning — the late 70s — where lore is thick and documentation scarce. To tell this story in any language would be a challenge; to tell it in the language of comics feels like a magical summoning.
— Lary Wallace - Vice

The first book had some great moments in it and this one does too. Picking up in 1981 this book weaves in all the different stuff that was going on at the time... and all of this is woven into an overarching saga that flows seamlessly and never feels like a collection of random anecdotes.
— Nick Gazin - Vice

This is the comic of all time.

Being in an Ed Piskor comic is cool enough to freeze hot water.

The most compulsively readable book of the year, the series gets better and better as its core cast of characters gets fully established and we get a bit more in-depth with them. ... Piskor’s style and design choices push the quality of this history of hip-hop over the top.
— Rob Clough - The Comics Journal

Whether you were there when it was happening or not, this is a book which will unfold a rich universe of music history and all the knock-on effects of it too. With the warmth and immediacy only a true fan could impart, Piskor tells the ongoing history of Hip Hop in these lovingly crafted volumes.
— Sonia Harris - Comic Book Resources

Ed Piskor has managed to seamlessly combine the history and mythology of hip hop in America into one of the most engaging comics in America today. ... The attitude and raw talent of the performers emanates from the pages.
— Chase Magnett - Comicbook.com

[A] rapid-fire telling of the early days of rap and hip hop culture… There’s a lot to learn even if you think you’ve heard it all.
— Gene Ambaum - Unshelved